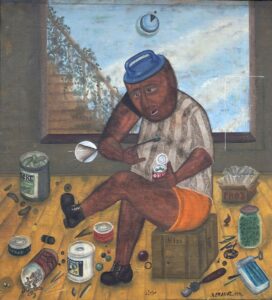 Vojislav Stanić is a painter of the world who has his own rituals. All his images are extremely narrative, something is happening on each one. And so “Taster” is a canvas with the figure of a man, who instead of a hat wears a cap on his head. He is sitting, focused on the open can of peas from which he has taken out with a spoon the contents he is preparing to try. He is surrounded by bulk open and closed cans and jars of food for tasting. He paints simple and unrepeatable events and performances, which he gives an aesthetic and philosophical dimension, or in the words of the artist himself: “Illusion is worth more, because illusion is human, while there will be truths even when people are no more.” That is why strange and sometimes almost impossible events take place in his paintings. In these paintings there are occasional Dekirik atmospheres, sometimes surrealism, distorted perspectives and double exposure, but also real-life stories, which pass us by. The painter was born in 1924 in Podgorica. He graduated from the Academy of Fine Arts in Belgrade in 1951. He dedicated the first few years of his work to sculpture and gave several notable achievements in stone, plaster and bronze, and from 1955 he devoted himself entirely to painting. He studied at study studios in Rome and Paris. He is a member of the Montenegrin Academy of Sciences and Arts and one of the most important Montenegrin painters, which is confirmed by his performance at the Venice Biennale in 1997.