Founding and the First Decades 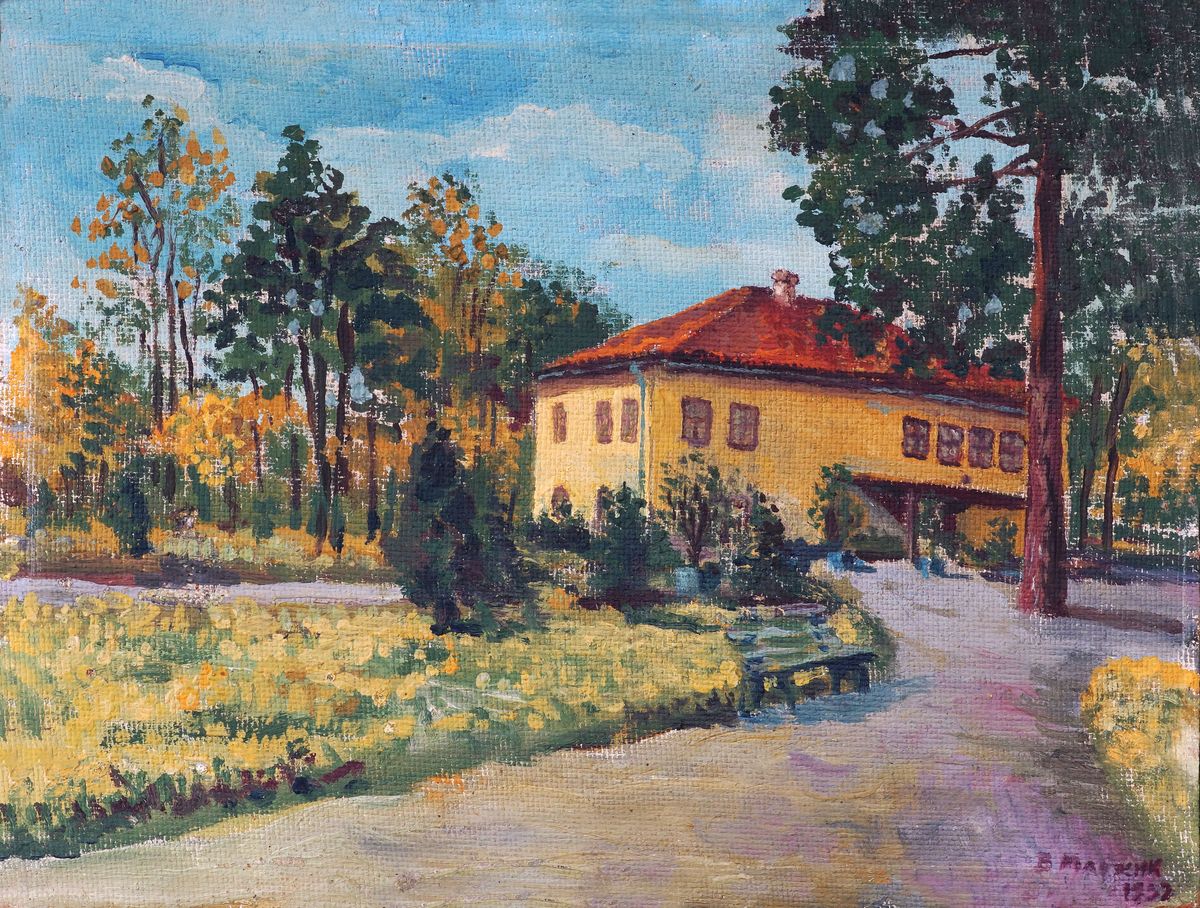 The National Museum in Kraljevo was founded on May 1st, 1950, and one of its founders and the first director of the Museum was the professor Milorad S. Jović, whose committed work marked the first decade of the institution, when almost all museum collections were formed. Being invited by the director, the painter Vladislav Maržik came to the Museum as the first conservator. One of the permanent associates was the geographer Panta Čolić, responsible for ethnology. Professor Jović was joined by numerous external associates, mostly teachers, during the first decade, which can be called the time of great enthusiasm for collecting material. The institution was housed in Lord Vasa’s Residence, a historical building from 1831, which was erected as the seat of Vasa Popović, chief of the Požega nahiyah. The first permanent exhibition of historical character was organised in it. The first decade ended with the retirement of the director Milorad S. Jović.

Having specific architecture and being a cultural monument of great importance, Lord Vasa’s Residence was conserved and restored from 1960 to 1963, and it was the main museum building until 1999. After the restoration of the building, the process of employing professional curators for the Historical Collection (1962), Ethnological Collection (1963), Art Collection (1973) and Archaeological Collection (1974) as well as the curator-conservator (1966) began. This period, when the institution was managed by the historian Miroslav Stamenović (1965-1979), was the time of full development of the Museum in all professional directions. The opening of the Gallery of Frescoes in 1965 stands out as an important event, when, in collaboration with the Belgrade institution bearing the same name, a collection of copies of frescoes from the 13th century, consisting of the works created by the most famous Serbian copyists, was formed. The idea behind this act was that the Museum in Kraljevo, by its position in the vicinity of the most important monuments of the Raška School, should have the potential to present the mediaeval artistic heritage of the 13th century. The need to open the Gallery of Frescoes implied a completely new space as a necessity, so that a part of the Ecclesiastical Court building, at the corner of Karađorđeva Street and Čika Ljubina Street (today the Historical Archives building) was allotted to the Museum as its second building. The first floor was adapted for the needs of the Gallery of Frescoes by removing the walls and thus forming three big halls, where the permanent exhibition of copies of frescoes was set up. 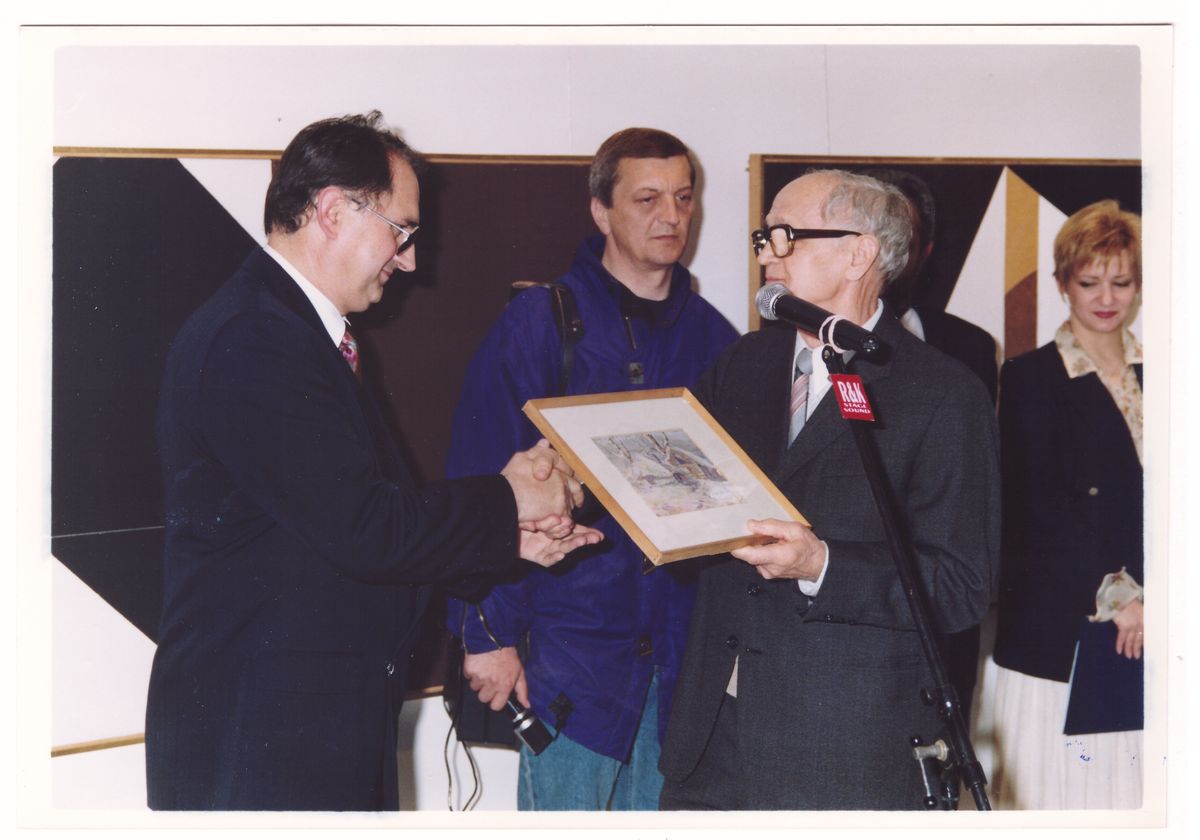 A new momentum in the development of the Museum was firstly marked by the coming of the art historian Milorad Mihailović (1974), who soon took over management of the institution (1979-1995). Two more departments were then established: Public Relations and Pedagogic Department (1983) and the Documentation Department (1991), and in 1986 the journal “ became the museum professional publication, whose first five volumes were edited by Milorad Mihailović. This period was also marked by intensive archaeological investigations, elaboration of scientific-research projects as well as rich fine arts activity, both in terms of exhibitions and in the procurement policy related to the Art Collection. In 1974, Milorad Mihailović initiated , an exhibition manifestation which has lasted, without interruptions, until today and which represents one of the valuables of the National Museum Kraljevo.

Many years of persistent efforts of the institution to provide appropriate space for its museum-gallery activity resulted in the decision of the Municipal Assembly of Kraljevo, in1985, to hand over the old school building in Saint Sava Square to the institution for further use. After the adaptation realised in two phases (1993-1995; 2002-2005), the renovated building, i.e. cultural monument of great importance, was turned into a representative museum building with the area of 1270 m in four levels, by which the National Museum in Kraljevo is nowadays recognizable.

At the opening of the new Gallery on the ground floor of the adapted building in 1995, the director Milorad Mihailović said: “By its historical and architectural values and cultural significance for a wider territory of Kraljevo, this building represents an important monument of culture. It was completed in 1873 and, at first, it housed the primary school with the town’s reading room (1873-1882), then the first School of Crop Farming in Serbia (1882-1927), the Grammar School (1927-1952) and again the primary school (1952-1976), so that it was the centre of literacy and culture all the time. It was proclaimed a cultural monument of great significance and preserved for future generations, and its transformation into the museum is the civilisation’s debt to our ancestors and our past“.

Although it began as the year of new enthusiasm, 1995 in September brought a sudden and tragic death of Milorad Miki Mihailović, one of the most important curators of the National Museum Kraljevo and one of the most prominent persons in the culture of Kraljevo.

New Museum Building and Rebirth of the Institution 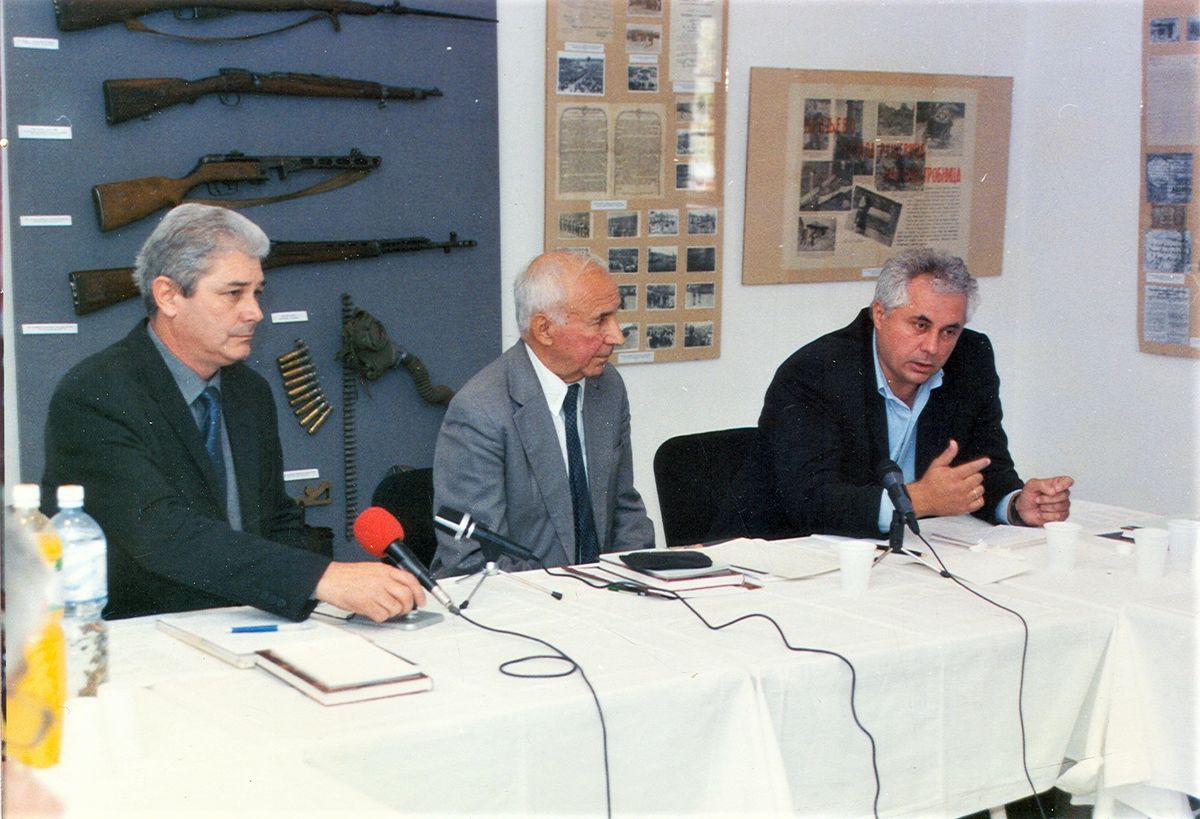 The management of the institution was taken over by the historian Dragan Drašković, who, with minor interruptions, was at its head until 2017 and who enabled its continuous rise. The opening of a new museum space in 1995 marked the beginning of a quite new stage in the history of the National Museum Kraljevo, which could be characterised as a complete transformation into a high quality institution within a relatively short period of time. The new Gallery allowed realisation of a series of big and attractive projects in the next years. The complete publishing activity was also changed, both in content and in design. The National Museum Kraljevo started its intensive cooperation with the graphic designer Dragan Pešić, who has shaped the recognizable, high quality look of its publications. The representative appearance of the building allowed the public to see the Museum as a new prestigious institution.

The Museum became the place for lectures, book promotions, discussions, workshops and scientific conferences. New activities, such as the regular classical music concerts in cooperation with the Music School “Stevan Mokranjac” Kraljevo and other music institutions also began. Since 1994, the Museum has been involved in the biggest cultural manifestation in the city – “The Days of Transfiguration”, not only through exhibitions, but through scientific conferences and round tables as well, which characterised the period 1995-1998. Four proceedings of scientific papers resulted from these gatherings. For the first time the Museum had the possibility to prepare big exhibition projects from its collections and several such projects, firstly from the Ethnological Collection, and especially from the Historical Collection and Art Collection, were realised during that period. It was the time of extraordinary guest exhibitions, which had not been seen in Kraljevo until then. Intensive archaeological excavations on Kopaonik, in Raška and in the vicinity of Kraljevo as well as the procurement of necessary technical equipment for investigations also belong to that period. The Numismatic Department was established in this period (2001), while the Natural History Collection got its curator in 2015. By the quality of its work, the National Museum Kraljevo started to stand out on the museum map of Serbia and gain reputation and trust. 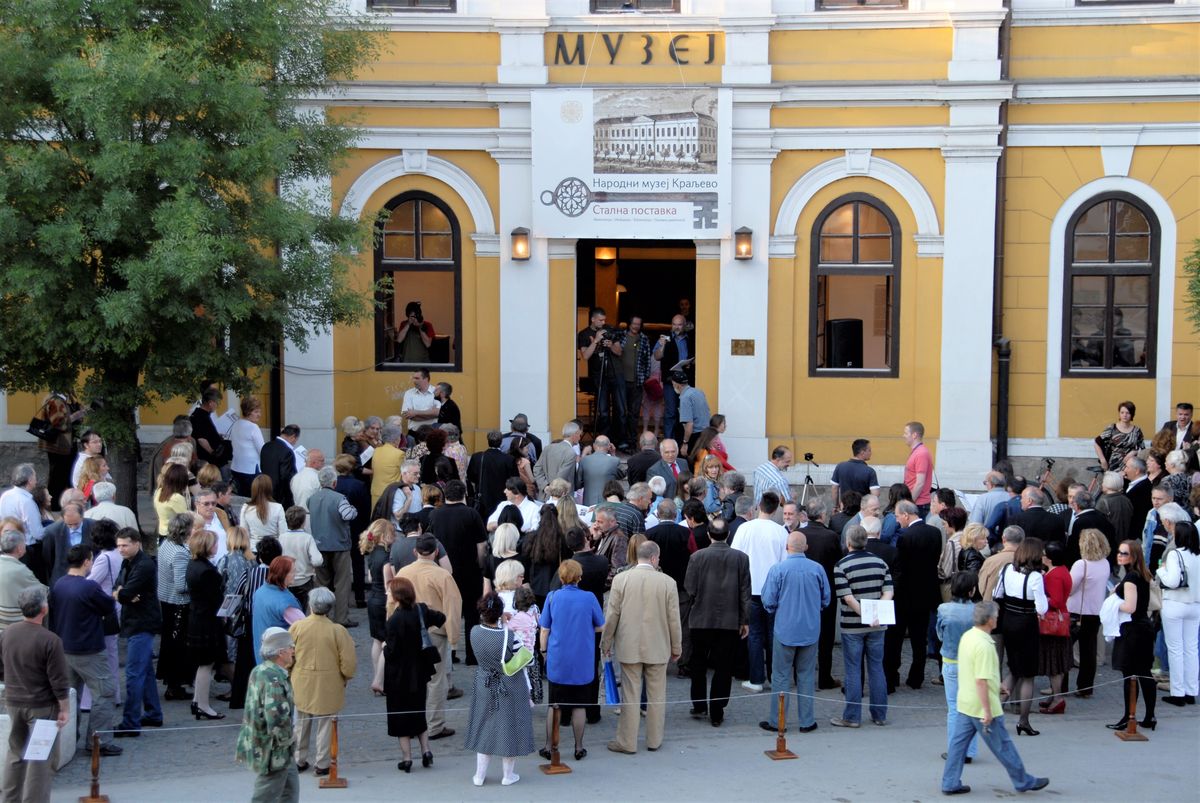 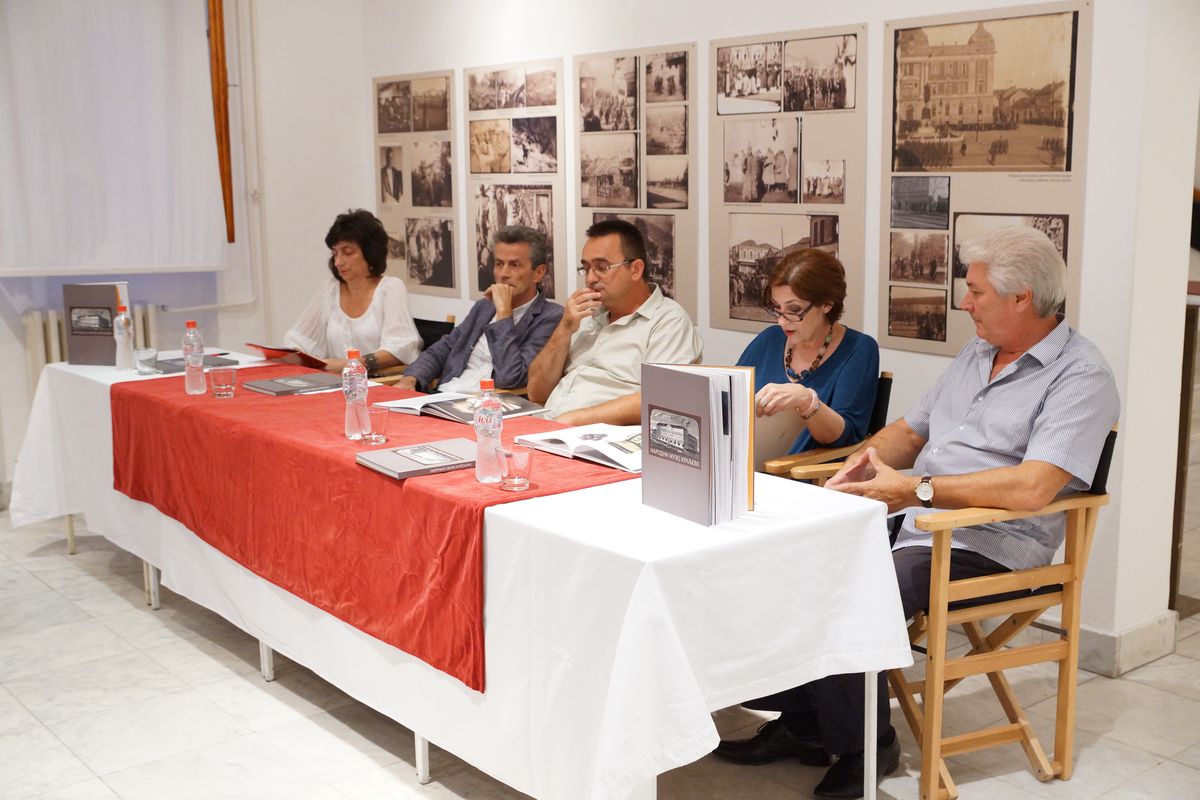 In the period after the building adaptation, one of the most important undertakings was the renewed publishing of the journal “Our Past”, interrupted in 1992. Continuing the interrupted serial, Volume 6 was published in 2005 with a new format and design, with high quality contributions (editors Dragan Drašković and Radomir Ristić, technical editor Dragan Pešić). After that, “Our Past” was regularly published and within a short period of time it was classified as one of several top quality professional journals in Serbia.

After the completion of the building in 2005, the first floor was dedicated to a big and complex permanent exhibition, as a view of the past and history of Kraljevo and its surroundings, using the potential of all museum collections. The exhibition was opened in May 2008 and it won the prestigious award “Mihailo Valtrović” of the Serbian Museum Association. 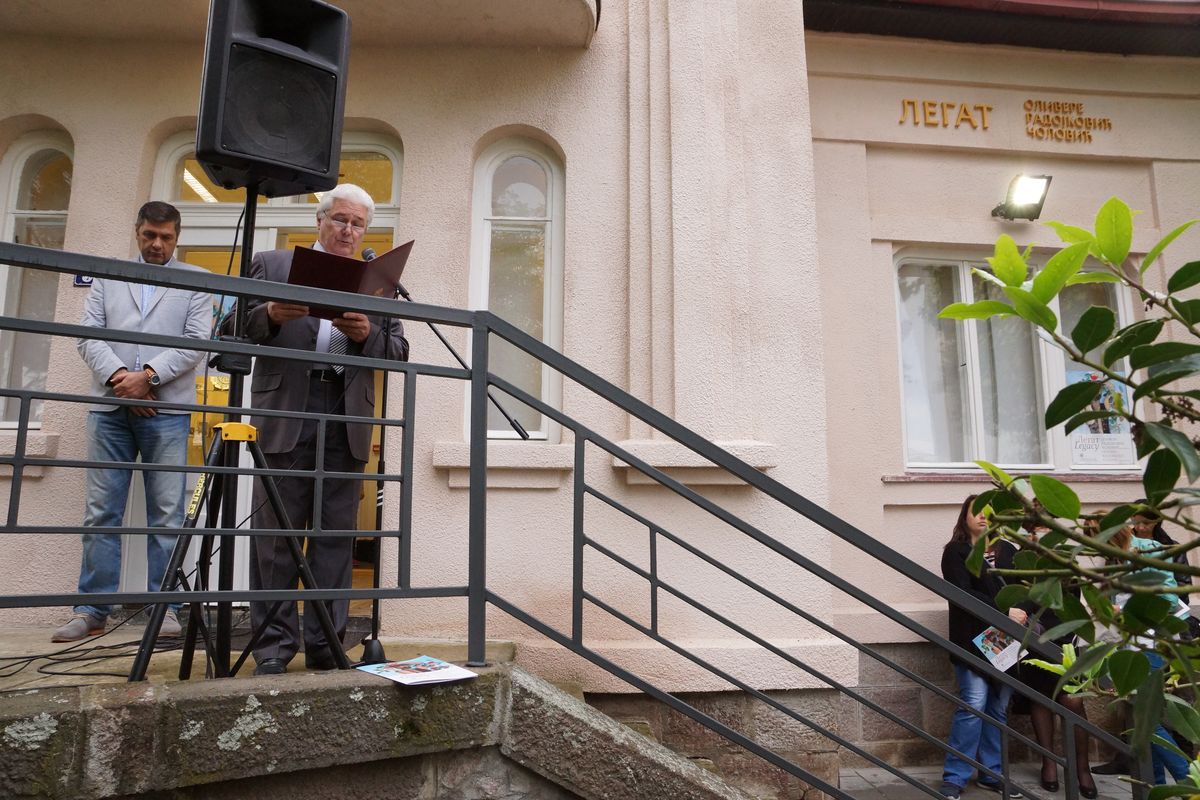 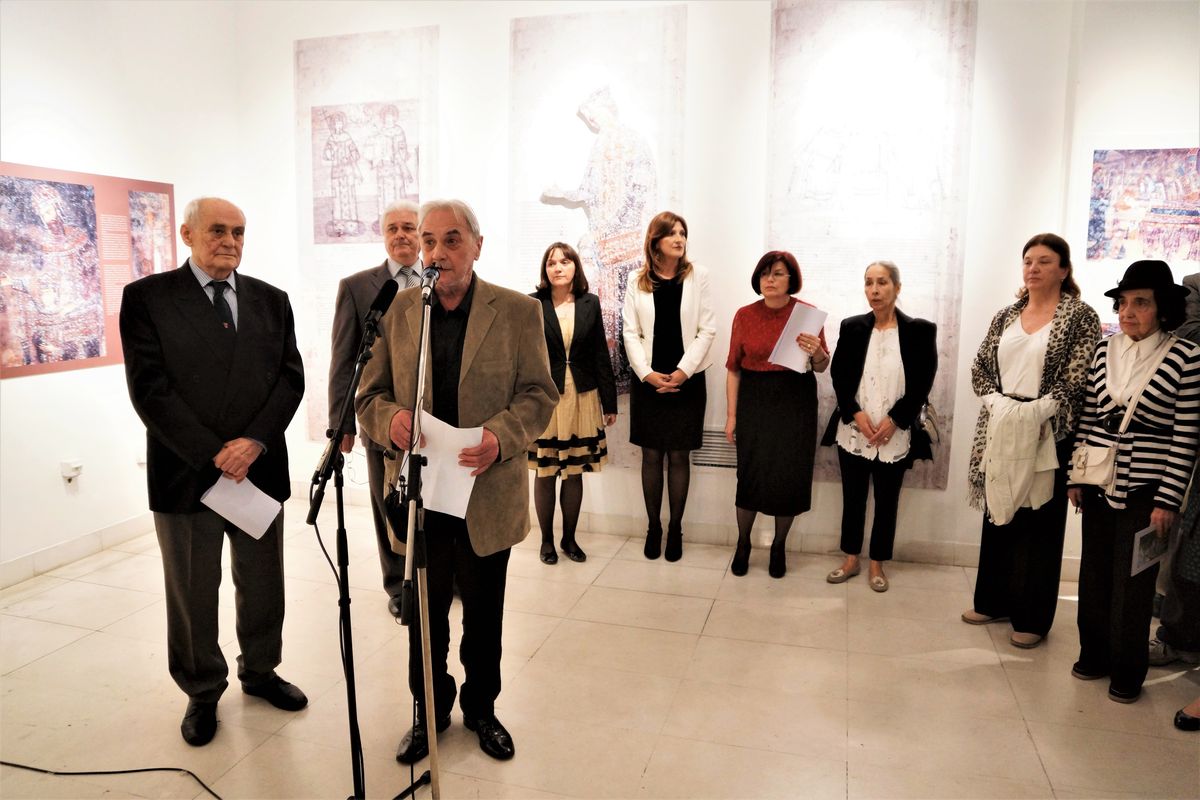 The reputation of the institution gained by its committed work was confirmed by an exceptional gift donated to the National Museum Kraljevo, and therefore to the city of Kraljevo, by Dr Olivera Čolović-Radojković. It consists of her family house in Karađorđeva Street no. 98 and a large collection of works of art and valuable household items. After the adaptation, the house with its collection on display was opened in 2016 as the legacy donated to the National Museum Kraljevo and another new cultural space in the city, and the monograph on the legacy was published in 2019.

Big exhibition projects of the National Museum Kraljevo, characterised by their interdisciplinary approach, were presented in a series of other cities as well as in Belgrade (in the Gallery of the Serbian Academy of Sciences and Arts and the Museum of Yugoslav History), surrounding countries (Montenegro, Republic of Srpska) and abroad (France). Numerous professional conferences and educational workshops for curators, as the projects of the Ministry of Culture, were realised in our premises as the institution of trust and a kind of regional centre for the museums in Central and Western Serbia.

The important position the Museum gained both in its milieu and in a wider national context has been confirmed by the recognitions for its results. The award “Mihailo Valtrović” for the museum of the year was given to the National Museum Kraljevo, for its permanent exhibition, by the Serbian Museum Association in 2008, and it is considered the highest award in museum activities. was awarded by the Assembly of the City of Kraljevo on King’s Day, October 7th, 2010. By the Decision of the Serbian Government of April 30, 2013, at the proposal of the Ministry of Culture and Information of the Republic of Serbia, the National Museum Kraljevo acquired the On August 26th, 2013, the Holy Synod of Bishops awarded the Medal of Holy Emperor Constantine, a high recognition of the Serbian Orthodox Church, for the contribution of the National Museum Kraljevo to cherishing and preserving the spirituality and culture of the Serbian people in the Diocese of Žiča. The National Committee of ICOM Serbia gave two awards to the Museum: Award for the Project of the Year for the exhibition “Growing Up in Kraljevo in the 19th and 20th Centuries” in 2014 and the Award “Museum for 10” in 2018 for the programmes within the manifestation of the same name in the previous year. 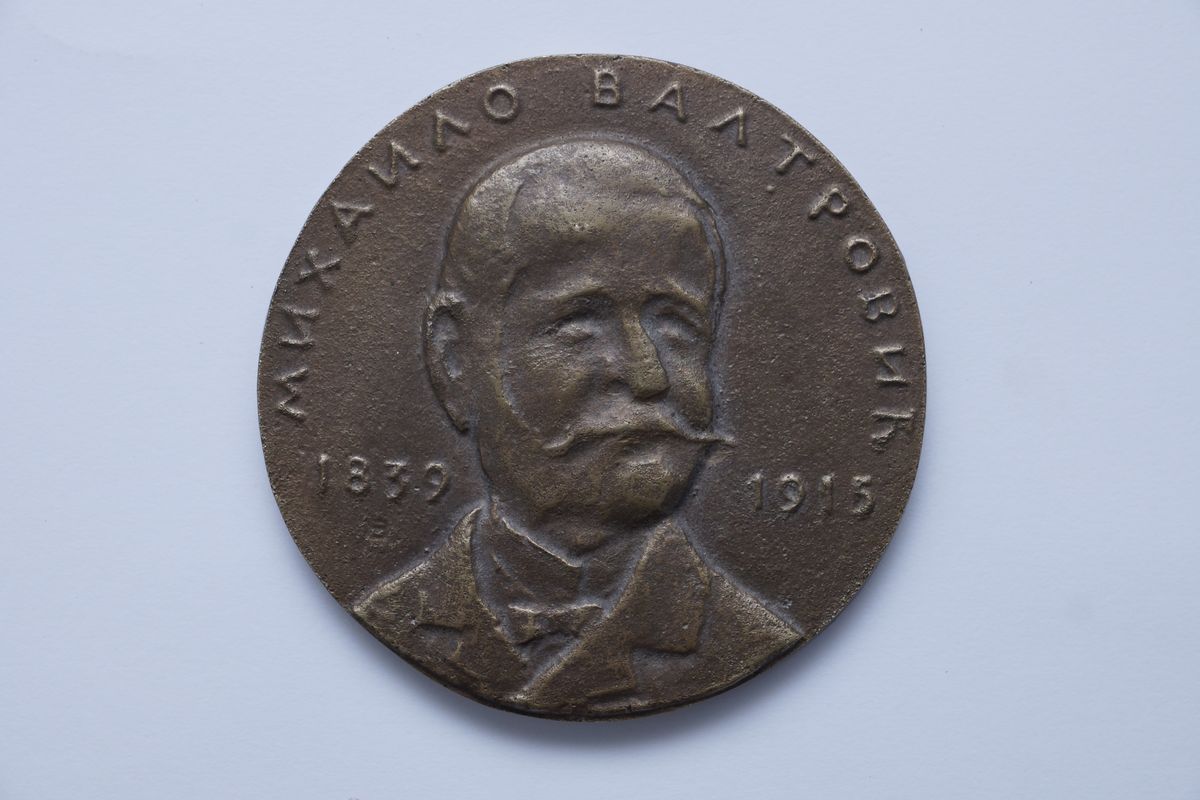 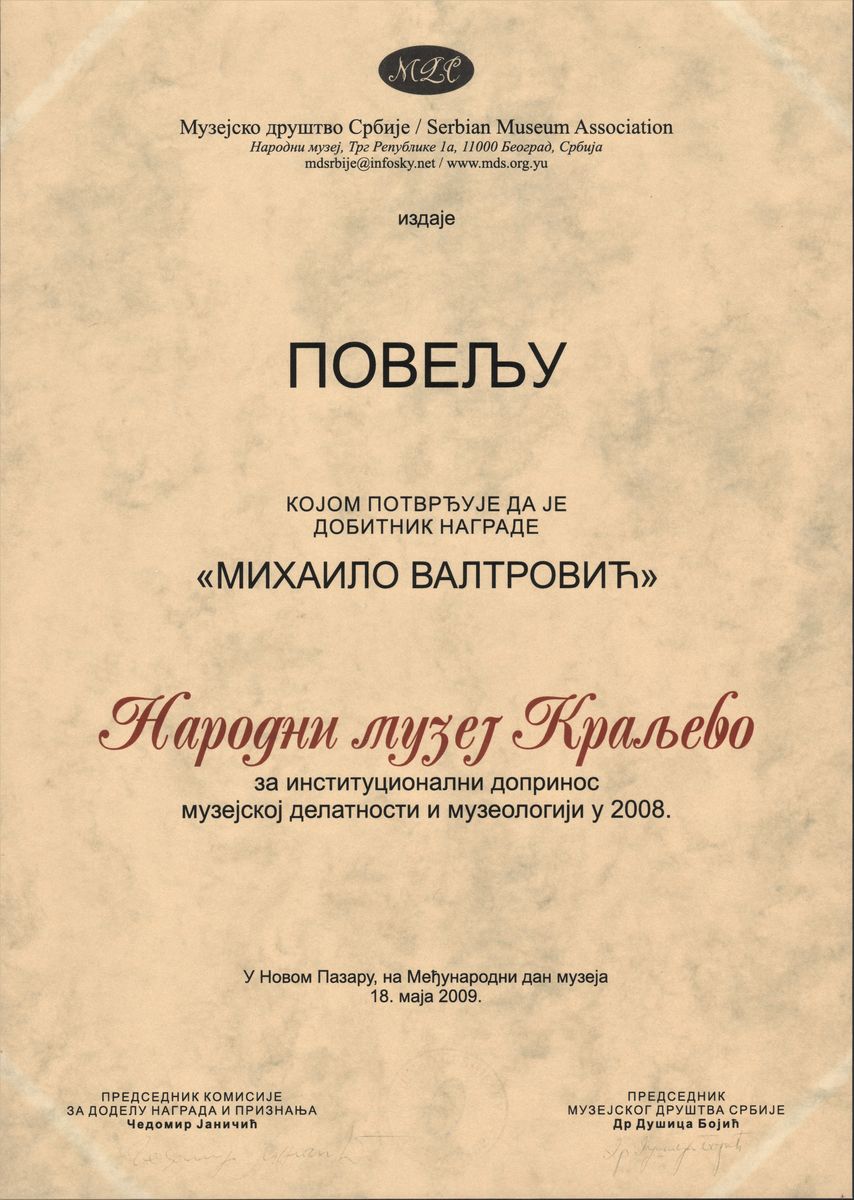 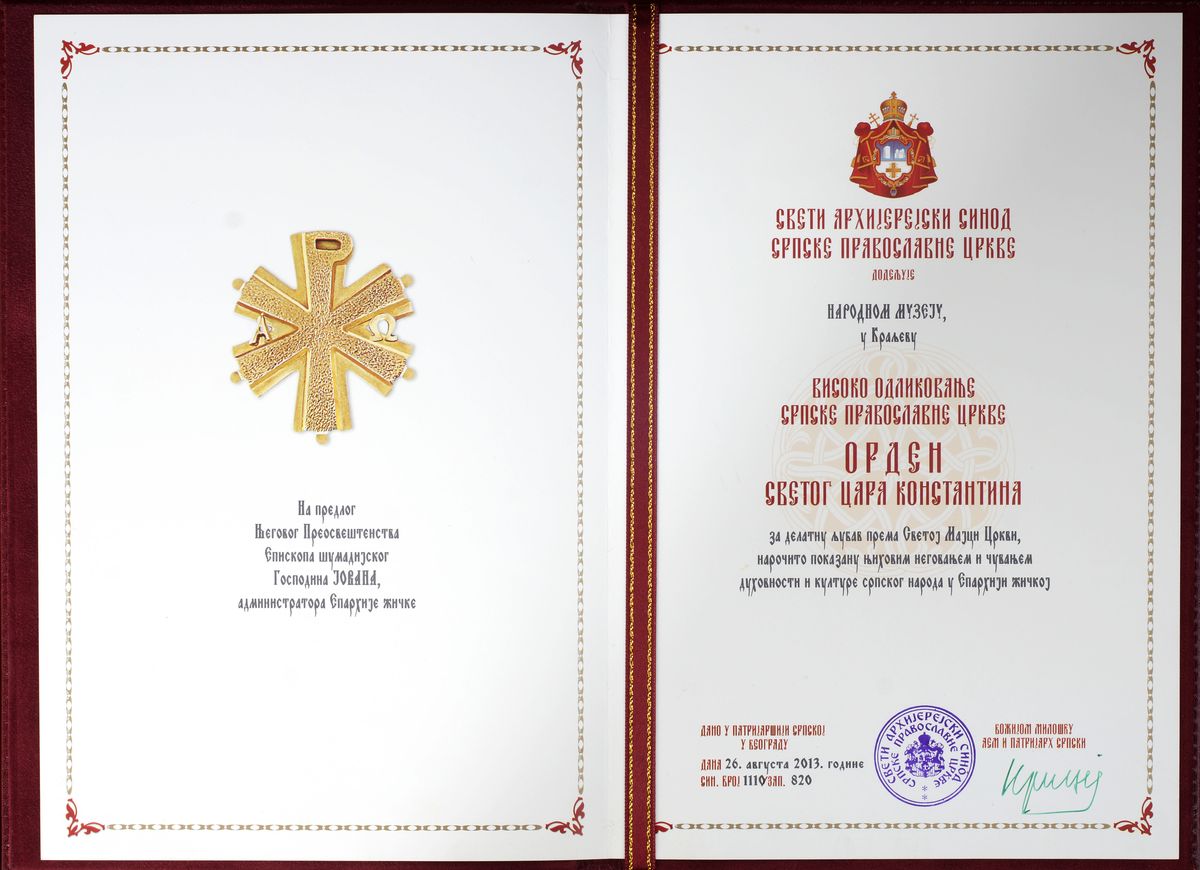 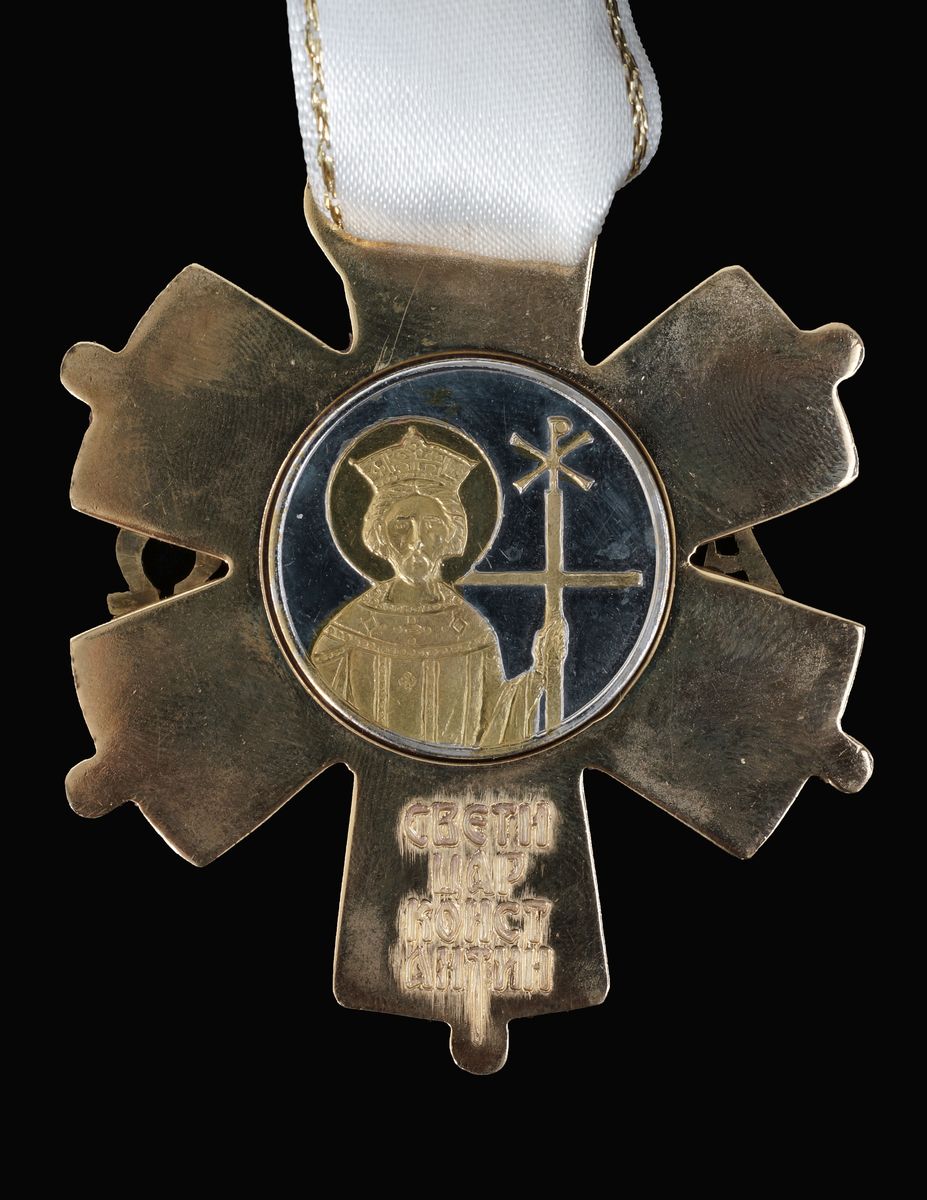 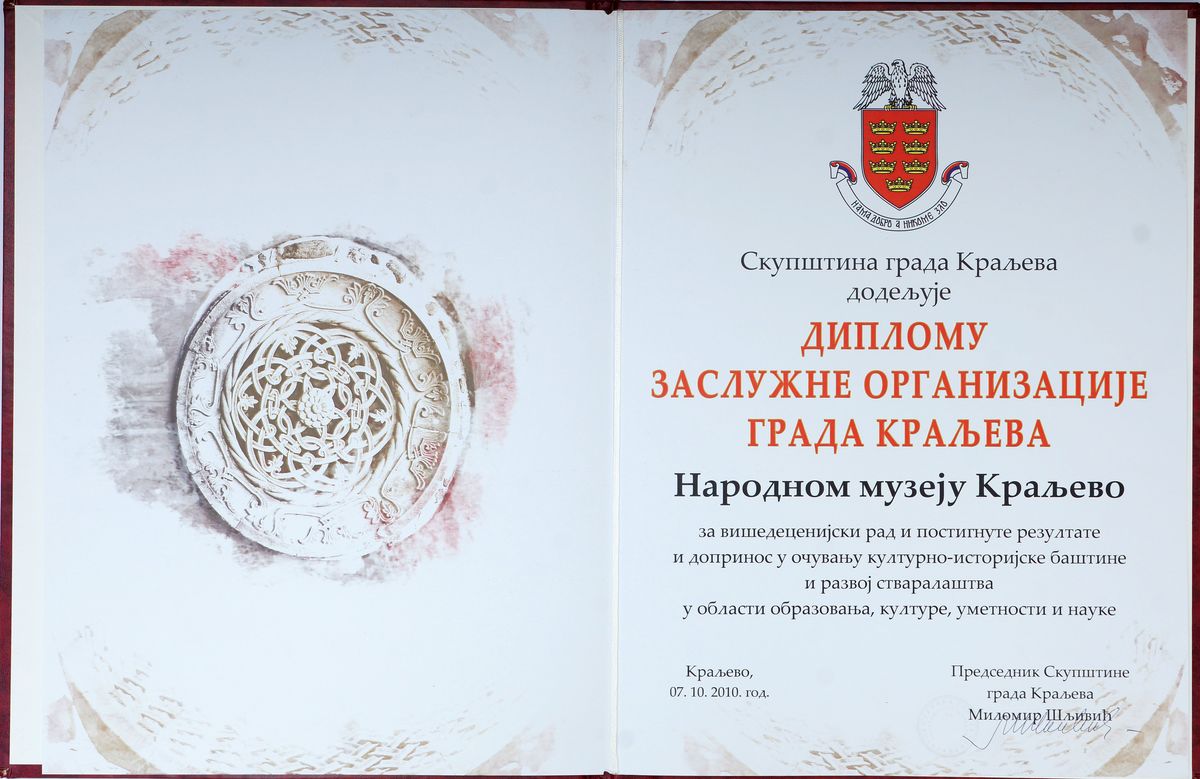 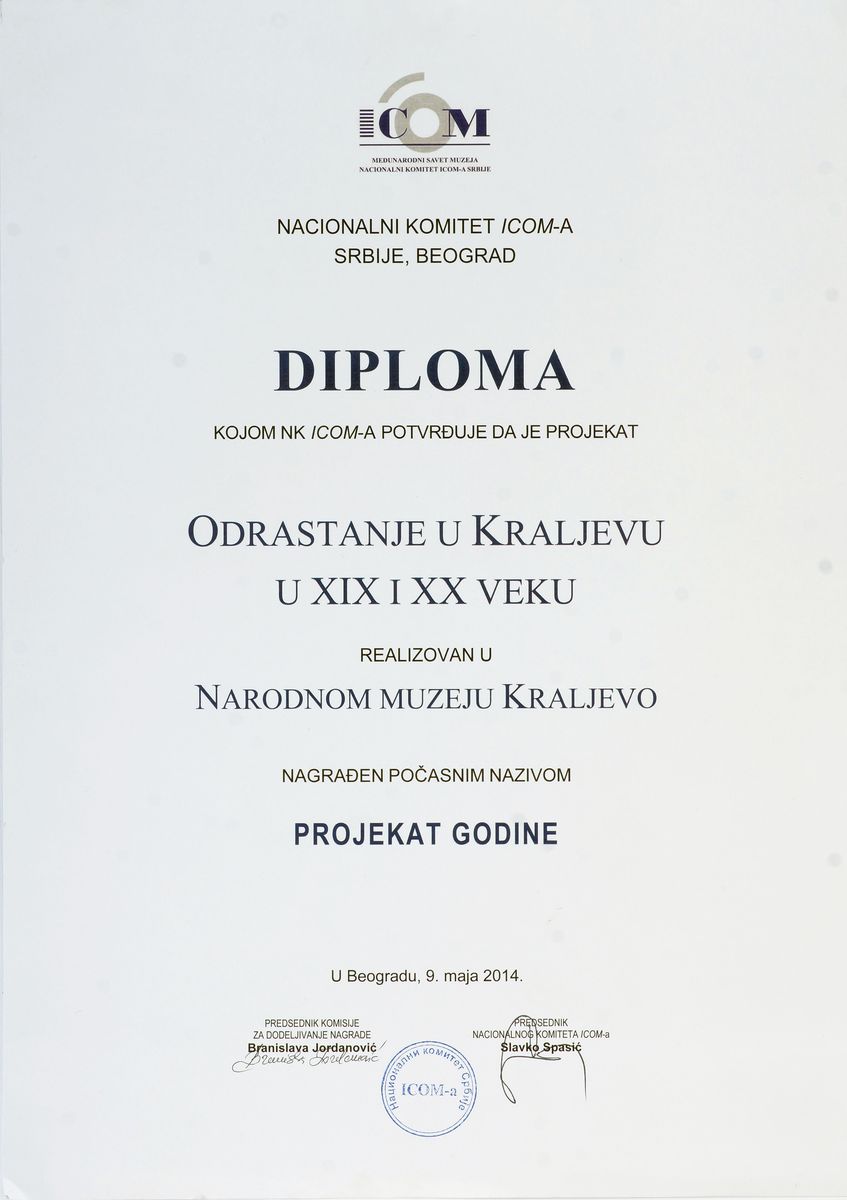 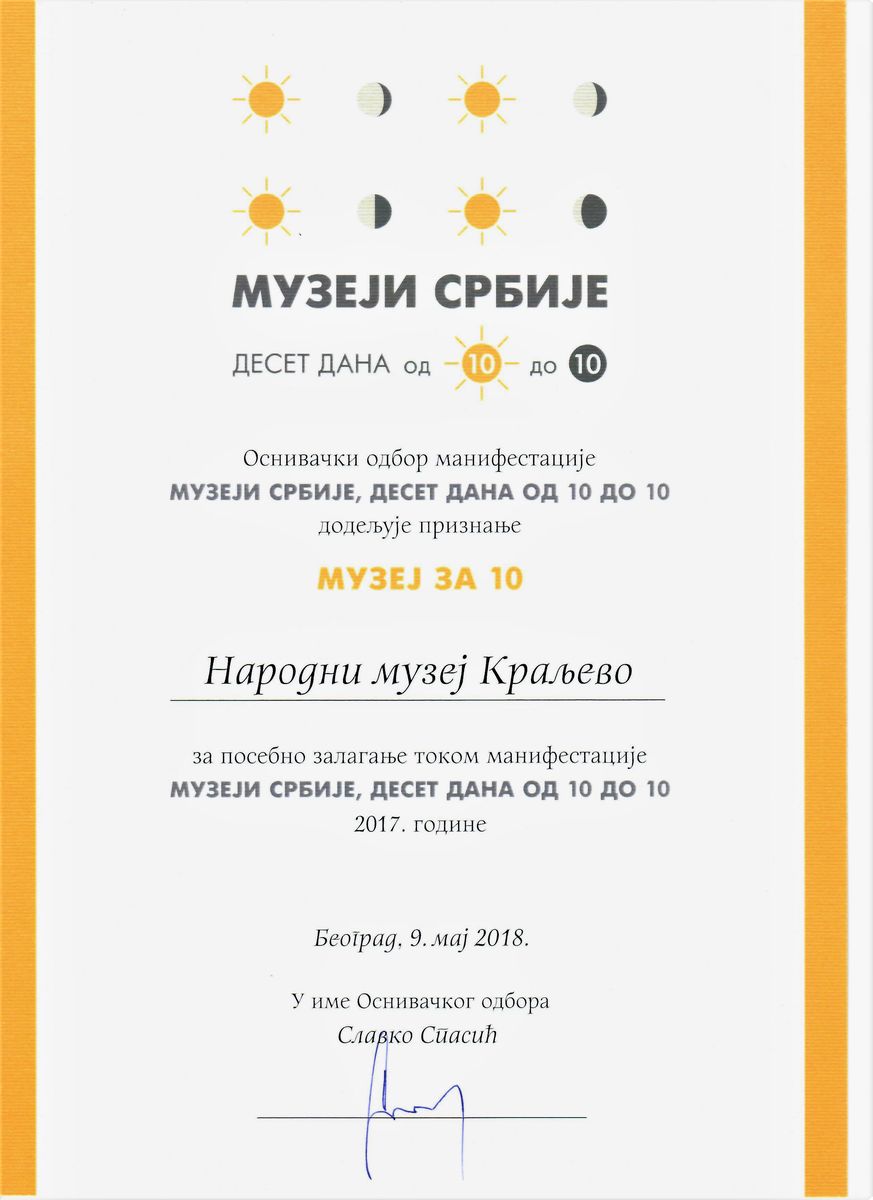