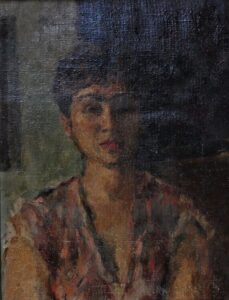 Mirjana Mihać (1924–2006) is an artist who has been creating and working throughout her life, and yet she has remained outside the already mentioned main currents of highly modernist painting and is unexplored from the point of view of art history. Immediately after finishing her studies, she was hired as an assistant, and then as a professor at the Academy of Fine Arts. At the beginning of the sixth decade of the last century, she worked equally in the field of graphics and painting and built her own artistic narrative of intimate, symbolic content. Although she never stopped painting, her increasing confinement in the hermetic circle of family, friends and students is noticeable. This is shown by the fact that she had only three solo exhibitions during her lifetime. The paintings from the Legacy of Olivera Radojković Čolović evoke her world of symbolic, poetic messages, filled with light, nature, and the characters of those closest to her, among whom is certainly Olivera Radojković, her godmother and friend. In addition to this portrait, there are several other works that are directly dedicated to Olivera.