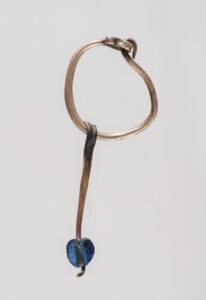 The earring was found during the research of the ancient necropolis Lanište in the village of Korlać in Raška, which was conducted by the National Museum in Kraljevo in 2002. It is a simple earring formed of filigree wire with a pendant with a pearl made of blue glass paste. It was found in the same grave as the necklace with a lunar pendant, which was made in a similar combination of blue glass beads and silver, which again indicates a workshop that supplied the inhabitants, but also the taste of a particular person.