With the founding of the Museum in Kraljevo in 1950, the preservation and study of the elements of material and spiritual culture found their place within the Ethnological Department and the intensive collection of this type of material began. The initial collection was composed of the town costumes belonging to different cultural and ethnic groups which originated not only in Kraljevo and its surroundings, but also in Kosovo and Metohija, Montenegro and Macedonia.

The richness and diversity of the Ethnological Collection is conditioned by the structure of the population of Kraljevo and its surroundings. The territory of today’s city of Kraljevo covers Lower Ibar, Upper Ibar, Morava and Lower Gruža, the regions distributed around the confluence of the Ibar and the West Morava from the south and the Gruža river from the north. The valleys of these rivers were natural crossroads of migratory movements in the past as well as of those happening nowadays. The neighbouring regional wholes – Levač, Upper Gruža, Dragačevo, Jelica, Kopaonik, Ušće and Studenica have strong influences on the ethnic structure of Kraljevo and its surroundings. Constant migrations of population and the geographical position of Kraljevo made this city one of the important stops for those coming from Novi Pazar, Upper Ibar, Kolašin, Vasojevići, Old Vlach, Kosovo and Metohija and aiming to settle deep in Serbia. Many of them stayed here, and, in the course of time, the objects of material and spiritual culture of their regions of origin became part of the tradition of their new homeplace.

A significant number of objects from the Ethnological Collection have been obtained by purchase, and that is how the collections of kilim rugs, shirts, towels, aprons, woven sashes, socks, furniture from town and village houses as well as household items made of different materials have been increased. However, a significant number of objects have been donated to the Museum, which shows the citizens’ trust in our institution.

The political circumstances in Serbia in the last decade of the 20th century were the reason for many displaced families and individuals to find their new home in Kraljevo and its surroundings. These events partially influenced the acquisition of museum material, but they also contributed to paying more attention to the preservation of traditional culture and national identity of displaced Serbian people. The expulsion from their centuries-old homeland did not prevent them from the wish and need to preserve the evidence of their ethnic identity, memories of their ancestors and family tradition. They offered the few things they managed to bring with themselves, which were the proofs of their existence in Kosovo and Metohija, to the Museum, the only institution which has appropriate conditions to preserve the parts of material culture from their homeland in the best way possible. The Museum is especially grateful to those who contributed, by their donations in spite of their difficult material situation, to the preservation of the treasury of folk creativity.

The costume, belonging either to village or town population, is the key for revealing ethnical and cultural specificities, past epochs, different influences and mutual permeation. Clothes represent a kind of communication among people and a reflection of economic circumstances and political events, the spirit of an epoch, time and territory; they also indicate moral and religious attitudes, gender, age and marital differentiations as well as the social status of the one wearing them. Many travel books, archival materials, artistic sources and photographs speak about this important part of material culture. Available data mostly refer to festive clothing, while everyday clothes were made of simple fabrics and had fewer ornaments. The Europeanisation of the clothing worn by town population took place gradually. In the first years of operation of the Museum, a significant and diverse ethnological material was collected. The sets and parts of the Serbian town costume, outer garments from Kosovo and Metohija, from Montenegro and Macedonia, as well as costumes and jewellery from Kraljevo and its surroundings make the basis from which the Ethnological Collection has developed. The opulence and indisputable aesthetic and artistic values of the women’s town costume, with libade as an element that stands out by its elegance, sophistication and long life, together with the jewellery from the second half of the 19th century and the beginning of the 20th century are an impressive testimony to the culture and taste of Serbian society

Kilim generates identity, both individual and national, as well as personal intimate stories. It is a response to human transience, but also a witness to everyday life of a family. Kilim weaving accompanied the birth of a child, the creation of a new life, new home and wealth. In the cultural heritage and rich textile creative work of our people, kilim making is one of the most valuable and most beautiful creations. Kilims also belong to the first objects collected for the Ethnological Collection, immediately after the founding of the Museum, and today the collection comprises over 150 specimens. The Museum obtained them through gifts and purchases, and they differ by their artistic and technical characteristics as well as by their function. On the one hand, there are well-known Pirot kilims, which represented high quality and prestigious objects provided for the representatives of urban culture. On the other hand, there are those created as a part of folklore in the villages surrounding Kraljevo, i.e. in the regional units, such as Podibar, Nadibar, Morava and Donja Gruža.

In Serbian history, the end of the 19th century and the beginning of the 20th century are important because it was the period when the state was established and organised on the model of West European countries. Besides the renovation of towns, this phase of historical development was also characterised by the appearance of a new social stratum. Educated and wealthy people gradually liberated themselves from the oriental way of life and accepted the influences from the West. A specific Serbian bourgeois culture was created and it was reflected in the novelties with respect to the furnishing of houses, when Vienna and Buda became models for the way and style of life, with the presence, to a certain extent, of a French influence as well. While building their houses, wealthy families took into account a large number of rooms with different functions. Except a kitchen and a dining room, the houses had a guest room, a drawing room, a study with a library, a children’s room, a bathroom and a servants’ room. The furniture, a mixture of the existing styles, imported from West European centres or made in domestic workshops, depended on the financial situation of the family. The new way of life imposed new habits regarding the use of household items. Fine and sumptuous objects required the use of glass cupboards. As for the novelties in preparing and serving food and drinks, it became necessary to have various dishes and cutlery finely manufactured in foreign or domestic factories. The only determinant for the newly formed bourgeois society, regardless of religion or nationality, was the financial status. 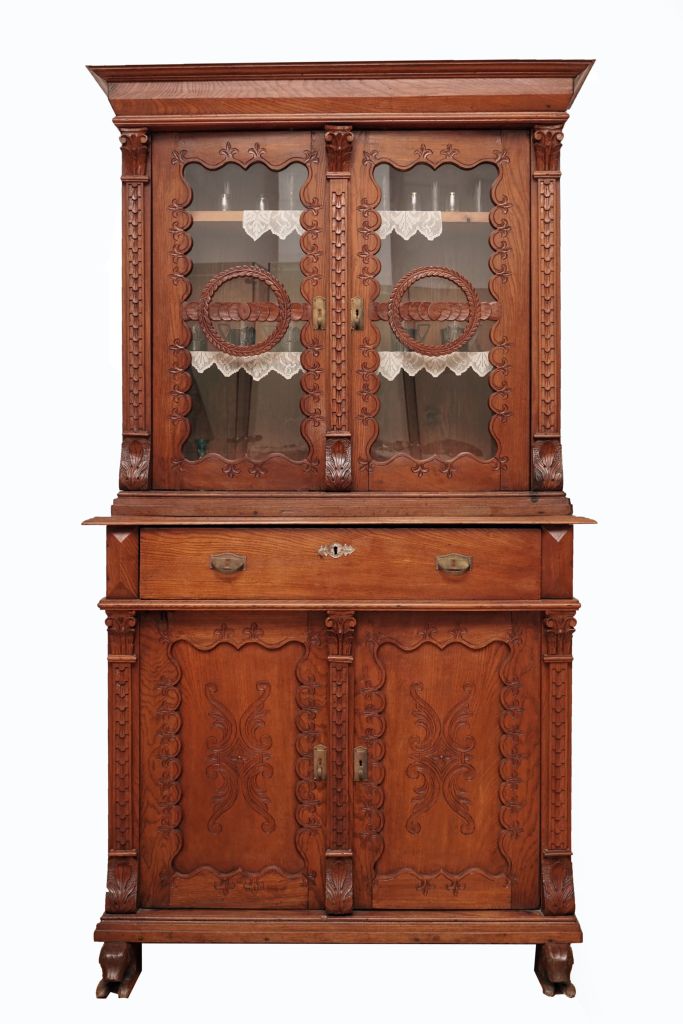 In the holdings of the Ethnological Collection, the most common products are those belonging to women’s handicrafts, garments, as well as tools and materials used for their production, from the processing of fibres, making of fabrics, cutting out and decorating finished clothes and objects for everyday life. The shirt, as the main product of women’s handicrafts, which truly depicts the creativity and skill of our women, has a pronounced position. The obligatory and inevitable part of the traditional dress culture of Serbian people, but also of the other nations in the Balkans, from the period of the 19th century and the first half of the 20th century, was the zubun – festive women’s sleeveless dress. It was made of white homemade cloth, richly decorated with stylised geometric ornaments or floral motifs, where the colour of ornaments is most frequently red. In the artistic-aesthetic sense, it is one of the most representative pieces of Serbian national costume. Another product of women’s handicrafts was a trousseau, prepared for a bride’s dowry, usually in an ornamented chest, specially made for that purpose.