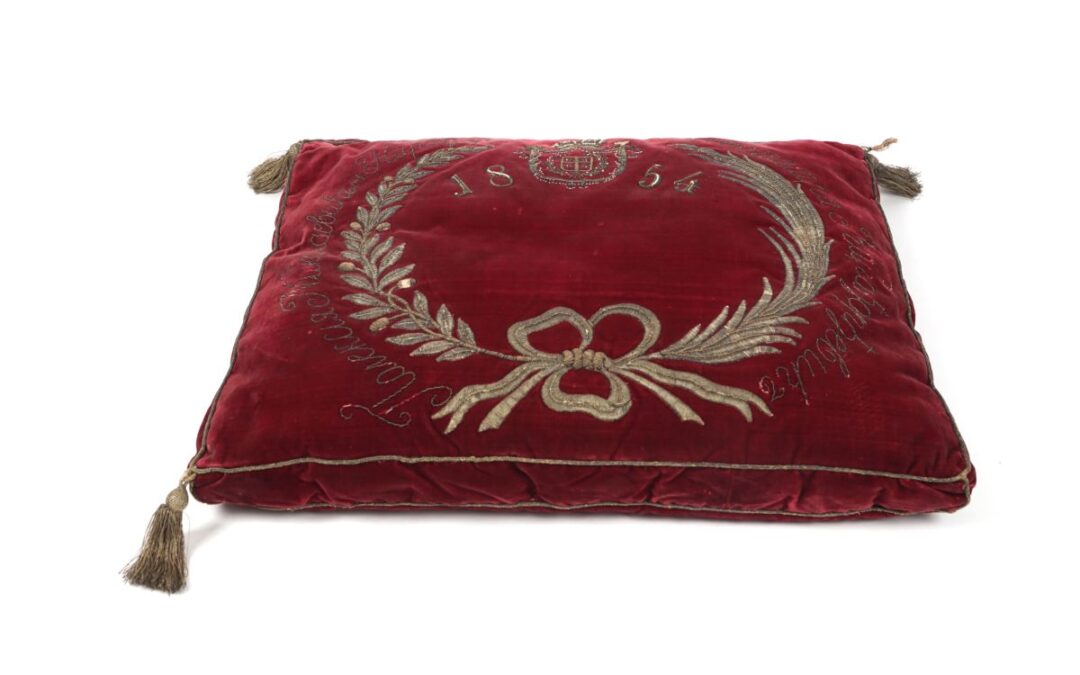 Princess Persida Karađorđević (1813-1873), wife of Prince Alexander Karađorđević, is one of the great donors of Studenica Monastery. In 1853, a cypress wood coffin was made for her in Vienna, covered with red velvet, with rich silver applications in the style of the second Rococo. The sarcophagus stands on lion’s paws made of silver, while at the corners are four angels cast in solid plastic, in the same metal. In the middle, both on the front and back, is the coat of arms of the Principality of Serbia. Along the edge of the casket under the lid, runs the founder’s inscription in blue enamel letters. The princess donated this coffin to the Monastery for the relics of Saint Stephen the First Crowned and, from then until today, they rest in it, in front of the Studenica altar. The ark was probably given as a gift, when other gifts arrived with it, a shroud for relics, a pillow, and slippers, made as a set of red velvet decorated with gold embroidery.

All gifts contain founding inscriptions, and one of them is a pillow for relics, a gift of Polexia and Cleopatra Karađorđević, daughter of Prince Alexander and Princess Persida. The pillow is made of the aforementioned red velvet and edged with a gold border with tassels on the corners, one of which is missing. In the middle of the pillow, there is a wreath in gold embroidery, as a central motif, inside which is the coat of arms of the Principality of Serbia and the year of donation – 1854. Around the wreath are the names of the founders: Polexia Novaković Karađorđević and Cleopatra Karađorđević.

As part of the project “Renovation of the Treasury of the Studenica Monastery”, which has been run by the National Museum Kraljevo for almost 10 years, this pillow, which testifies to the important place that the Studenica Monastery, and especially the relics of the Holy King, had during the 19th century, was conserved along with other gifts from the princely house. in the formation of the modern Serbian state. On the other hand, they are also a sign of the deep piety and devotion of Princess Persida and her children to the saint.

The conservation of textiles from the Treasury of the Studenica Monastery is continuously being done by Milica Mirković, senior conservator of the Ethnographic Museum in Belgrade, and Marija Labudović Pantelić, conservator of the Museum of Applied Art in Belgrade, in coordination with the National Museum Kraljevo. The project is financed by the Ministry of Culture and Information of the Republic of Serbia.