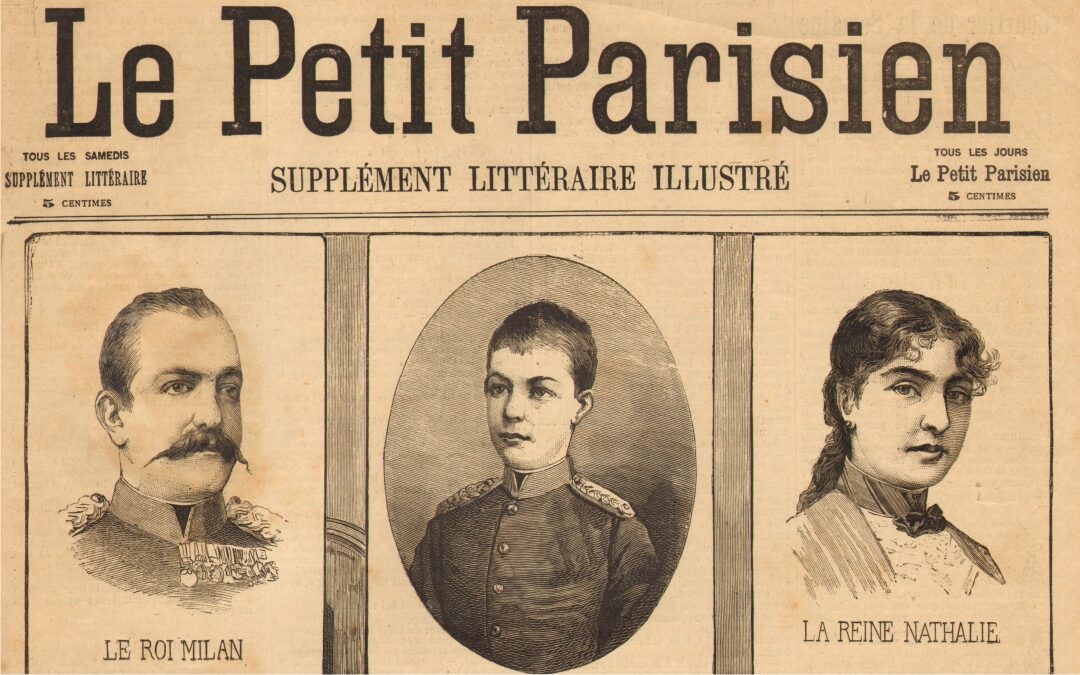 Although the first years of the marriage of King Milan and Queen Natalie were extremely happy, the situation changed over time. Harmonious relations were disturbed by the numerous infidelities of the Serbian ruler, the dramatic difference in the characters of the spouses and, finally, the opposites in political views surfaced. Namely, the queen did not approve of her husband’s Austrophilia, but at first, she did not argue with him about it. Only in the spring of 1885, perhaps due to the influence of Milan Piroćanac on Natalie, did the first quarrels between the spouses begin related to the king’s political course. The Serbian ruler was supposed to “think like a Greater Serb.” A particular stumbling block was the intention of Milan to have the Serbian heir to the throne brought up in Vienna, in Teresianum, to which the queen did not agree at all. The political discord of the royal couple was intensified by the affair that the young ruler started with his uncle’s sister, Maria Catargiu, who was Natalie’s protégé. The king, who needed a family environment full of peace and comfort, was instead met with the opposition of his wife, constant quarrels, and reproaches. During 1885, Milan’s displeasure with the queen was great.

Personal and Political Conflicts of the Royal Couple

The defeat of the Kingdom in the Serbo-Bulgarian War will further complicate the relationship of the spouses. After the inglorious war, King Milan was determined to abdicate the throne and announced his plan to Queen Natalia to flee the country with his son. Milutin Garašanin, the prime minister of the Serbian government, managed to force the king to give up his abdication through unwavering pressure. Milan proposed an intermediate solution, according to which power would be handed over to the queen as regent, and the Serbian ruler, following the example of Napoleon III, would go to the army. The idea of Natalie as a representative of the interests of the heir to the throne was accepted by the Austro-Hungarian representative in Serbia, Count Kevenhiller, who considered Milan’s resignation inevitable. During the war, Natalie showed courage, nursed the wounded and was in favour of prolonging the conflict, and Kevenhiller was amazed by the queen’s demeanour and patriotism, although they were not on good terms until the war. Kevenhiller communicated his plans to Natalie without being authorized by his own government. The queen did not long for power, but for several days she believed in the necessity of her regency, believing that she should defend her son’s rights to the throne. However, it soon became clear that official Vienna was against the change on the throne, and Natalie saw that she and Milan could better secure Alexander’s future together, and she was ready, even though she had no love for her husband, to fully stand in solidarity with him.

However, rumours about the Queen’s regency were spread by her personal friends. The king firmly believed that she conspired with Ristić and Piroćanac against him, which was not true. Milan’s sick distrust and mania of suspicion led him to think that Natalie wanted to overthrow him from the throne. The queen did not remain indebted to her husband, condemning his politics, doubting his political abilities, underestimating his intelligence. Over time, mistrust and antipathy towards the queen grew stronger, and the king developed an irresistible and implacable hatred, reinforced by proximity and constant presence, and by the extinguished love, which created pain and bitterness. At first, the queen was not aware of the situation, believing that it was a quarrel between spouses where the fault lay with the unfaithful Milan. Her dignified and somewhat contemptuous demeanour, of an impeccable and stubborn woman, offended the king. The conflict was transferred from the private domain to the political one, and the relations between the spouses were so strained that even the smallest trifle was enough to break them. On the eve of Easter, on April 16th, 1887, in the palace chapel, Queen Natalie did not extend her hand to a lady from the diplomatic corps who, it seems quite unjustifiably, was suspected of being the king’s mistress. Milan Obrenović fell into an unexpectedly great rage. His wife’s tactlessness caused him to write her a letter stating that their life together is not possible and that she must leave Serbia. A day later the king and queen explained each other and a written agreement was drawn up. The Serbian ruler wanted to avoid a scandal at all costs. According to the agreement, the heir to the throne was supposed to be educated abroad, and Natalie would accompany him on that journey. The issue of Alexander Obrenović’s education concealed the true state of affairs between the spouses. In mid-May 1887, the queen travelled to the Crimea with her son.

Kidnapping of the Young Heir to the Throne and Final Divorce

According to the agreement of April 1887, the question of where the heir to the throne will be educated should have been resolved in the spring of 1888. At the end of March, the queen informed the king in a letter that she plans to return to Belgrade for Easter. Since there was no answer, she wrote again that she would come to Serbia in June. However, Milan Obrenović did not want to raise the issue of the heir to the throne. It seemed that he was preparing for a conflict with the queen, as evidenced by the composition of the new government with Nikola Hristić at the head, where several ministers were in personal enmity with Natalie. On her way to Serbia, Natalie stopped in Wiesbaden with the plan to go to Belgrade at the end of June, as a result of a warning that an uprising was about to take place in Serbia. From Wiesbaden, she wrote a defiant letter to the king, to which Milan responded by submitting a petition for divorce to the metropolitan on June 23rd, 1888. The heir to the throne remained with the queen and, in the imagination of the Serbian ruler, could serve as a means of pressure. Milan appealed to the German government to put Natalie under surveillance and detain her if she were to go to Russia. German Chancellor Bismarck proposed to send to Wiesbaden a Serbian officer who would take the heir to the throne from the queen. The idea was accepted and General Protić was sent to Germany. Through that envoy, the king offered Natalie an agreement in which, in order to avoid a divorce scandal, he offered to leave her the royal rank and title and take care of her son for the next five years. The queen did not want to accept the agreement, considering that she had not hidden anything, and she thought that her firm and courageous demeanour would discourage the king. Due to Natalie’s intransigence, the king ordered General Protić to forcibly take the heir to the throne from the queen.

The kidnapping of Alexander Obrenović was carried out on July 14th, 1888 in Wiesbaden and represented a first-class scandal. The marital discord of the royal couple was revealed in all its force and in a very unpleasant way. After the Wiesbaden scandal, the queen became more lenient and the king intransigent. She hinted that she would accept the agreement, but Milan did not want to discuss anything. The matrimonial litigation brought by the king got stuck on the question of jurisdiction, since the council of bishops and the ordinary spiritual court, wanting to avoid it, shifted responsibility. The position of King Milan was not easy. The queen’s lawyer was Milan Piroćanac, an excellent lawyer, who planned to drag out and entangle the litigation in the formalities of the divorce proceedings, and for Natalie to be in Serbia for all that time. The king had a large number of enemies because of his politics, and apart from Jovan Ristić, and that too with restraint, no influential politician from any party was on his side. Finally, Serbian public opinion sided with the queen, as a distressed mother whose child was kidnapped. When he saw that he could not obtain a divorce in the regular way, Milan Obrenović put pressure on the metropolitan to dissolve the marriage. Under pressure from the king, and without any legal basis, the metropolitan divorced the royal couple on October 24th, 1888. The separation was not carried out properly, which only strengthened the sympathy of public opinion and the queen’s supporters for Natalie. The reputation of King Milan suffered a big blow. Divorce was frowned upon in patriarchal Serbia. Abroad, after the accident at Slivnica and the Wiesbaden case, Serbia became known as the country of great court scandals.