Vesna Vesić – Looking in the Rearview Mirror in the Snow Tunnel 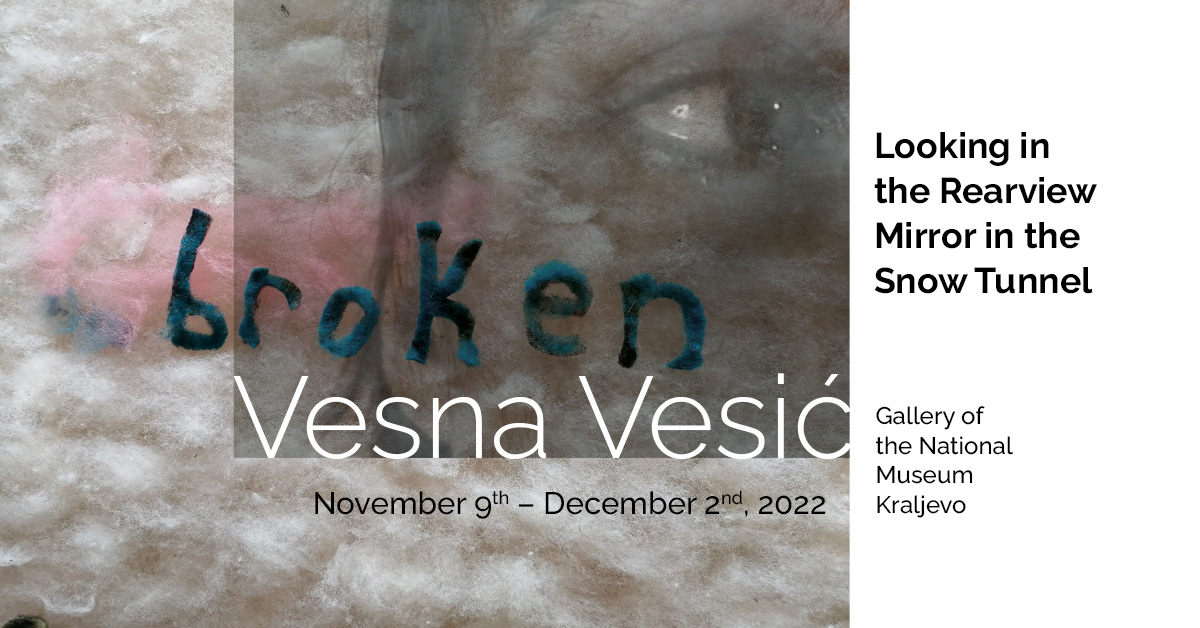 Vesna Vesić is a multimedia artist, whose work is characterized by an emphasis on involvement, complexity, and experimentalism, which she creates by acting through the medium of video (in the first person), drawings in materials such as wool, installations and text. She graduated from the Faculty of Fine Arts in Belgrade in 2001. She participated in many exhibitions in the country and abroad (Ljubljana, Vienna, Warsaw, Trieste, Rome, Amsterdam), and her most significant participation was at the 48th Biennale in Venice, in the international selection of curator Herald Zeman.

In the National Museum Kraljevo, she will present herself with an exhibition called “Looking in the Rearview Mirror in the Snow Tunnel”, which represents a kind of retrospective view of her artistic work so far. The exhibition consists of video works, from the first entitled “Wash Me and I Will Be Whiter Than Snow”, which refers to the war reality of the nineties, with which he participated at the Biennale in Venice in 1999, as part of the exhibition D’APERTutto, through works under entitled “Winter Fairy Tale” and “On a Distant Path, the Lonely Noise got Tangled in the Grass”.

In addition to performative works, the supporting part of the exhibition is made up of the so-called Tender Things-conceptual&useful, which represent wool paintings, objects – paintings, materialized through the materiality of everyday, useful objects: pillow, blanket, bedspread, robe. The basic idea of Vesna Vesić is to produce a woolen painting that covers us, that we touch and twist with. The technique of wool felting, which intertwines wool threads, creates a fabric – an object through mechanical rhythmic action, within which the artist creates a new field of reference, because she intervenes with text on the soft and warm fabric. In this way, he introduces a completely new, engaged content, in which he argues with political, ecological, and poetic texts. She embeds letters and words into the surface of the image – fabric, which refer to the phenomena of today’s great, tectonic changes as stigmata. That is why her visual objects are a place of affirmation of the political and intimate writings and verses of important philosophers and poets (Louis Althusser, Margaret Mead, Teodor Adorno, Oskar Davičo, Goran Babić, etc.). Crossing autobiographical, historical, intimate, and social stories, he experiments with textures and materials, rethinking old and new artistic languages and maintaining an engaged attitude towards civilization and historical consciousness, togetherness, and emotional-affective bonds on which communities rest.