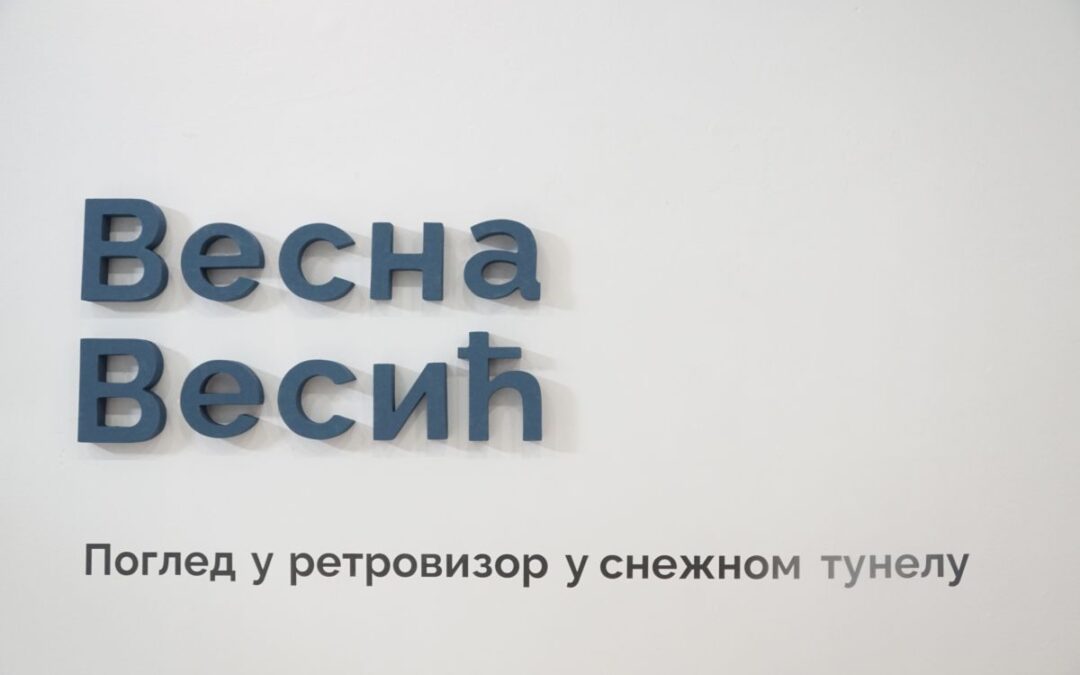 The exhibition of the artist Vesna Vesić entitled “Looking in the Rearview Mirror in the Snow Tunnel” opened in the Gallery of the National Museum Kraljevo, on Wednesday, November 9th, 2022, starting at 7 p.m., and represents a kind of retrospective view of the artist’s previous artistic work. The exhibition was opened by Suzana Novčić, museum advisor of the National Museum Kraljevo, who spoke about the work of Vesna Vesić. She pointed out that she is a multimedia artist, whose work is characterized by an emphasis on involvement, complexity, and experimentalism, which she creates by acting through the medium of video (in the first person), drawings in materials such as wool, installations and text.

The exhibition also featured her first video work entitled “Wash Me and I Will Be Whiter Than Snow”, with which she participated in the 48th Biennale in Venice in 1999, and it refers to the war years of the 1990s. With this work, she underlines what will be the essence of her later works, which are empathy and compassion. At the first meeting with the artist and her artistic narrative, it is clear that she is, as Duchamp would say, “working on art”. For her, art is a space where she reviews ideological discourses, political, personal narratives, trying to, like all of us and people outside of art, somehow reconcile and understand all those tectonic disturbances that happen to us every day. In addition to the video work, the exhibition also presented works called “Gentle Pieces” made of organic wool, which the artist processes by hand and incorporates letters into them as a kind of stigma, that is, poetic and philosophical quotes. The National Museum Kraljevo bought one of her works, an organic wool blanket with an embroidered quote from Margaret Mead, an American anthropologist, who says that “compassion is the beginning of civilization.”

Then Vesna Vesić addressed the audience and looked back on her video work, which she made as a student of the Faculty of Fine Arts, which is the result of all the feelings summed up in that moment, the moment of growing up during the wars of the 90s of the last centuries. From that experience, she uses something constructive that will leave a mark through her work, as well as her children. She also pointed out that the work “Looking in the Mirror in the Snow Tunnel” is the only possible answer, on the one hand, to her mini-artistic oeuvre from the end of the 90s to the present moment, where an ordinary observer can find wholeness. On the other hand, from the point of completeness, the only answer can be given, with a deep bow and a gift, to all our ancestors, all our predecessors, who left their mark in the code of civilization. After the opening, the audience watched the video work “Wash Me and I Will Be Whiter Than Snow” projected in a special hall.