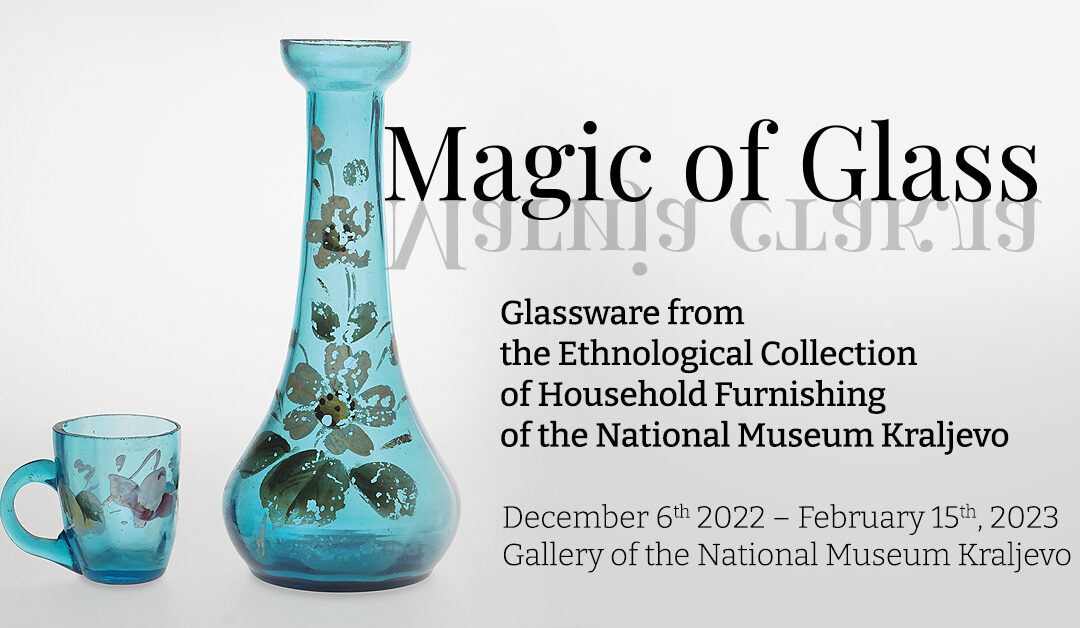 The exhibition “Magic of Glass: Glassware from the Ethnological Collection of Household Furnishings of the National Museum Kraljevo” by Violeta Cvetanoska, senior curator of this institution, which was organized on the occasion of marking 2022 as the International Year of Glass, declared and supported by the United Nations, was officially opened in the Gallery of the National Museum Kraljevo, on Tuesday, December 6th, 2022, starting at 7 p.m.

The audience was first addressed by Darko Gučanin, director of the National Museum Kraljevo. He pointed out that with the aim of affirming glassmaking throughout history and studying the development of technology, artistic design, economic importance and revitalization through creative entrepreneurship, the year 2022 was declared the International Year of Glass by the resolution of the United Nations General Assembly. The National Museum Kraljevo along with other similar institutions in the Republic of Serbia, took part in this event by organizing an exhibition in which glass objects from the Ethnological Collection of Furniture were displayed.

Biljana Jotić, acting director of the Museum of Applied Arts in Belgrade, in her address to the audience, emphasized that tonight we gathered around art, skills and something that is part of our cultural heritage. Through the Museum of Applied Art in Belgrade, which is the main museum in the field of glass, teamwork was coordinated to mark the year of glass. Glass is something that everyone is used to using, enjoying it, and handling it with great care, because of its fragility and thinness, but also because of its beauty. Artists who shape glass artistically play a big role in glass production.

The audience was then addressed by Zoran Lević, director of the Museum of Science and Technology in Belgrade, who emphasized that man created glass 3500 years ago and that during that time glass evolved as well as man. It turns out that glass is a material of the past, present, and future, as this exhibition shows.

Violeta Cvetanoska, senior curator of the National Museum Kraljevo and the author of the exhibition, spoke about the project, which lasted about two years, and about its concept. The material comes from the Ethnological Collection of the National Museum Kraljevo and illustrates production in the first glass factories in Yugoslavia, from the end of the 19th and the beginning of the 20th century onwards. The audience has the opportunity to see for the first-time objects made of glass, which are kept in the Ethnological Collection, and represent the culture of everyday life of the middle class. The appearance and operation of factories that operated within the former Yugoslavia are followed: “Nacko Janković and Son”, “Kristal” in Zaječar, “Serbian Glass Factory” in Paraćin, “Ukras” in Alibunar, “Skopska Staklarnica” in Skopje, and present are also items made in various factories in Central Europe.

The exhibition was opened by Biljana Crvenković, senior curator of the Museum of Applied Arts in Belgrade and coordinator of the Glass Group at the National Committee of ICOM Serbia. She pointed out that this group has been working together for two years and is made up of curators from different parts of Serbia. Many programs are planned during the year of glass, but the exhibitions are still the most important. They lead to the awakening of feelings for the preservation of real values, which include glass moulding and our heritage in glass, at this moment when it is practically disappearing. We can actually preserve it only now, so everything we have at home already represents a kind of heritage. She pointed out that she is especially glad to open an exhibition about glass in the context of ethnology.