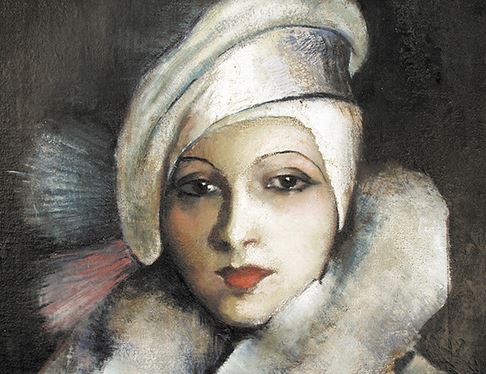 The exhibition “Milena Pavlović Barilli – Life and Dreams” by Violeta Tomić, senior curator of the Gallery of Milena Pavlović Barilli in Požarevac, opened at the National Museum Kraljevo, on Tuesday, December 21st, 2021, starting at 6 p.m. In front of the hosts, the audience was greeted by Suzana Novčić, museum advisor of the National Museum Kraljevo, and referred to the specific, almost unique place that Milena Pavlović Barili has in the art history in this area, but also in a much broader context, both in Europe and on the New York stage, thanks to her life as a nomadic artist. The author of the exhibition, Violeta Tomić, spoke with inspiration and detail about Milena’s life, creation, travels, difficulties, dreams and finally premature death, as well as the gift of her works and legacy by mother Danica to the Serbian people and the role of the famous Miodrag Protić in forming the Gallery in Požarevac.

The exhibition has a chronological concept, and the first part shows Milena’s academic period, the period of schooling, in which she often paints members of her family, especially her mother Danica, who was the great-granddaughter of Sava Karađorđević, married Ristić, Karađorđe’s eldest daughter and grandmother Bosiljka. The second part covers her Parisian period, when she was engaged in metaphysical painting under the influence of George de Chirico. It is then created through enigmatic compositions with allegorical motifs, where ancient elements intertwine with modern ones. One of the characteristic symbols is a brick, ie a brick wall, as a symbol of the lack of a parental home. Since 1936, color has taken precedence in her painting, over the line that had dominated until then, and she returns to her father’s Renaissance legacy from which she draws inspiration. Thanks to this concept, the audience will be able to see the entire opus and its short and dynamic life, which is marked by schooling, travel, and constant creation in European capitals: from her native Požarevac and Belgrade to Munich, Paris, Rome, and finally, New York.