From the Timok Rebellion to Slivnica 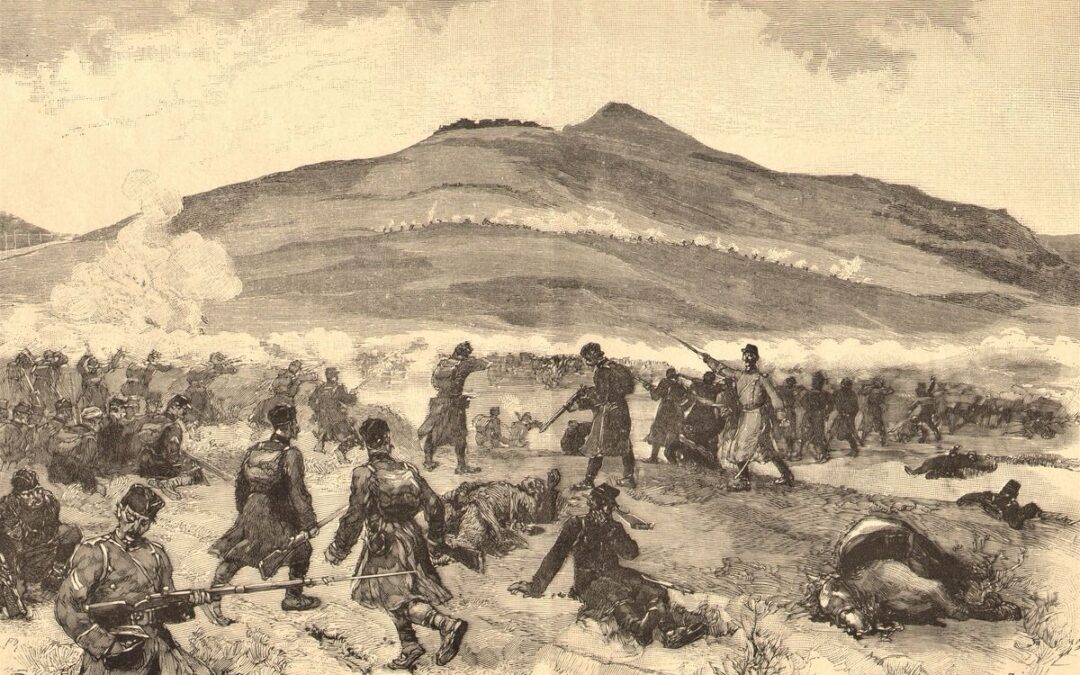 The relentless political struggle between the progressive and radical parties in the fall of 1883, in which both sides did not choose the means, showed that there was considerable dissatisfaction among the people directed towards the government. The radical agitation caused great resistance of the people to the government, and the rebellious mood that existed threatened to cause riots at any moment. The cause, which will lead to an open rebellion, existed since July 1883. The progressive government, wishing to arm the Serbian army with modern, uniform rifles, ordered that old weapons be collected from the national army, while at the same time new weapons remain in warehouses. Radicals saw this measure as preparation for a coup d’état, and the formation of a bureaucratic government in October 1883 by Nikola Hristić looked like a prelude to the abolition of the Constitution. One of the first measures of the new cabinet was to order the disarmament of the people’s army to be carried out immediately. Due to the resistance of the people, the implementation of that order did not go smoothly. On November 3rd, a state of emergency and a summary court was introduced in the Crnorečko district, where in the Boljevac county, the rebellion was started by the representative of the Radical Party, priest Marinko Ivković. At the same time, the movement spread to the spa area of the Aleksinac district, where it was led by Ljuba Didić. A day later, Aca Stanojević also raised a riot in the Knjaževac district. A day later, Aca Stanojević also raised a riot in the Knjaževac district. The government responded by declaring a state of emergency and set the standing army in motion against the rebels, commanded by General Tihomilj Nikolić. Better armed and organized regular troops easily defeated the insurgents and on November 13th, 1883, after only six days, the rebellion was suppressed.

The participants in the rebellion were judged by the High Court in Zaječar, which sentenced 94 of them to death, 567 to imprisonment, 5 to detention and 68 to prison. 20 people were shot, while the rest were either pardoned or escaped. The Timok Rebellion also served to deal with the leadership of the radical party, all of which, except for Nikola Pašić, were arrested on the night between November 7th and 8th, 1883. The Supreme Court sentenced Nikola Pašić, Pero Todorović, Raša Milošević to death, Kosta Taušanović was sentenced to seven years in prison, and Pavle Mihailović to five years. Nevertheless, none of the leaders of the radical party were shot, Pašić was on the run, while Todorović and Milošević’s sentences were commuted to ten years of imprisonment.

The consequences of the Timok Rebellion were the final end of the existence of the people’s army, the regular troops became the mainstay of the power of King Milan and the radical party became a classic bourgeois party devoid of ideas about the fight against the bureaucratic state.

King Milan and the Government of Milutin Garašanin

After the Timok Rebellion, King Milan was the complete master of the situation in the Kingdom, the Radical Party was fully suppressed. His reputation and power have never been more evident. The elections for the National Assembly, carried out under the pressure of Nikola Hristić and the police, created an overwhelming progressive majority in the Parliament. Disagreement between King Milan and Hristić’s bureaucratic cabinet caused his resignation. At the beginning of February 1884, the Progressive Party returned to power, to which the young ruler was accustomed and trusted. The new cabinet, led by Milutin Garašanin, was more susceptible to the king’s influence than the previous one, because the coming and staying of the government in power depended on the ruler. Garašanin, the bearer, as the son of Ilija Garašanin, a significant name and political influence, witty and ironic, courageous, and yet not excessively hard-working, seemed like a bad choice for the president of such a government, especially since his conflict with his cabinet colleague Stojan Novaković threatened to lead to his resignation. However, Garašanin was the ideal minister for Milan Obrenović. Without a personal political direction, he quickly understood the direction of the ruler’s thoughts and ideas, accepted them and implemented them. The king, who wanted to grab all the reins of power for himself, left only administrative tasks to the ministers. The period of progressive governments, especially the cabinet of Milutin Garašanin, is the time when Milan Obrenović has the predominant influence on the creation of foreign and domestic policy. The turning point in those years was the war between Bulgaria and Serbia.

The government of Milutin Garašanin immediately faced complications in terms of foreign policy, since the conflict with Bulgaria broke out. The cause of disagreements in early 1884 were the issues of Bulgarian support for Serbian emigrants who participated in the Timok Revolt and the issue of the border patrol and the Bregovo estate. At the end of May 1884, Bulgarian troops occupied the disputed watchtower, and Garašanin’s government responded with an ultimatum stating that, if the Bulgarian government did not remove the emigrants from the border, the Serbian diplomatic agent would be withdrawn from Sofia. Attempts to mediate between the member states of the Triple Alliance and direct negotiations between King Milan and the Bulgarian Prince Alexander Battenberg did not bear fruit. Serbia broke off diplomatic relations with Bulgaria, disputes remained unresolved, and the emigrant issue threatened to cause an armed conflict.

The political situation in the Balkans became complicated on September 20th, 1885, with the unification of the Principalities of Bulgaria and Eastern Rumelia. The attitude of Garašanin’s government towards that event depended on King Milan’s point of view. The Serbian ruler believed that Bulgarian unification harms the state interests of the Kingdom and disrupts the balance of power in the Balkans established by the Berlin Congress. If the results of the Plovdiv coup are annulled, Serbia will remain calm, otherwise, it will look to restore the disturbed balance by force of arms. King Milan did not think of a war of conquest, he did not want territorial expansion, but the goal was to prevent Bulgarian unification and to show that without Serbia the state of affairs in the Balkans must not change. The Serbian ruler planned to immediately go to war against Bulgaria, but he agreed to the mediation of Austria-Hungary, which tried to provide the Kingdom with territorial compensation in the form of the Vidin or Trn region. This plan failed, as did a similar initiative by the United Kingdom or an attempt to negotiate directly between Bulgaria and Serbia. The great powers publicly condemned the Plovdiv coup, but it was decided not to spoil the Bulgarian unification. An acceptable formula was devised so that the areas of the Principality of Bulgaria and Eastern Rumelia would remain officially separated, but actually united, since the dignity of the Bulgarian prince and the Rumelia governor would be exercised by the same person.

It became clear that King Milan could only seek satisfaction of his demands on the battlefield. Thus, on November 14th, 1885, Serbia declared war on Bulgaria. In the Kingdom, the beginning of the conflict was greeted with relief, since the army had already been mobilized for a month. Enthusiasm was absent because almost all representatives of political parties and most of the audience were against an armed conflict with another Slavic country. Apart from that, Serbia was neither diplomatically, nor militarily, nor financially ready for war. Not wanting to share the glory of the war, King Milan became the supreme military commander, thus bypassing the famous commanders from the Turkish wars, Belimarković, Horvatović, and Protić. Jovan Petrović became the Chief of Staff. According to the new organization of the army, the largest part of the troops of the first call was mobilized, and only six regiments of the second, a total of about 52,000 people. The war plan meant to quickly seize part of the Bulgarian land that we claimed as compensation for the Plovdiv coup, namely: Vidin district up to Lom and Sofia district up to Ikhtiman. After the conquest of Sofia, it was necessary to fortify and wait for the Bulgarian army. For this purpose, the troops were divided into two groups. The first consisted of the Drina, Danube, Šumadija and Moravian divisions with a cavalry brigade, which advanced in the direction of Sofia. The second group consisted of the Timok division, which was moving towards Vidin.

War operations began on November 14th, 1885. On the secondary route towards Vidin, the Serbian troops had success, while the group directed towards Sofia made slow progress. Nevertheless, on November 17th, the Serbian army found itself in front of Slivnica, not far from Sofia, where a large, three-day battle took place, the most important in this war. The Serbian troops suffered a failure and had to retreat towards the Dragoman Gorge. In the absence of the most experienced strategists, the Serbian army was truly commanded by King Milan Obrenović, who, according to Slobodan Jovanović, was not a soldier by training or nerves, and was not very brave either. After the defeat, he turned to the Great Powers asking for an armistice. That did not stop the Bulgarian army, which on November 22nd suppressed the Drina division, regained control of Caribrod and dominated the heights above Pirot. The great powers proposed a truce on November 24th, to which King Milan immediately agreed and even withdrew the army from the border positions, without asking whether the Bulgarians also agreed. The troops of the Bulgarian Prince Alexander Battenberg took advantage of this and entered Pirot two days later. The battle of Pirot ended the war between Bulgaria and Serbia, since already on November 28th, the Austro-Hungarian ambassador in Belgrade, Count Kevenhiller, on the orders of Andrassy, put pressure on the Bulgarian side to accept the truce.

Negotiations on the conclusion of a truce were initially conducted directly between Bulgarian and Serbian representatives, but as no agreement could be reached, the Great Powers intervened at the invitation of the Garašanin government. A commission made up of the military attachés of the Great Powers in Vienna drew up the text of the armistice, which implied the withdrawal of the Hungarian, that is, the Serbian army from the conquered territory and the appointment of plenipotentiaries who should negotiate peace. Peace negotiations began in Bucharest at the beginning of February 1886. Bulgaria gave up the demand for the payment of war reparations, the Serbian government gave up the demand for signing a trade agreement, so on February 17th, 1886, peace was signed between the two conflicting parties, without territorial changes. The great powers, indirectly, agreed to the unification of the Principality of Bulgaria and Eastern Rumelia by declaring the Bulgarian Prince Alexander Battemberg as the governor of Eastern Rumelia.

The war with Bulgaria, which King Milan Obrenović understood as a personal matter, showed his good and bad qualities. It has been shown that the Serbian ruler possesses political intelligence, sobriety and farsightedness, but also that he is extremely despondent. The nervous fear, present since youth, appeared now. This is best evidenced by Milutin Garašanin’s comment, when he met Queen Natalie after the end of the war: “Why didn’t you tell me what kind of king he is?! If I had known what he was like, I would never have gone to war with him!”. Apart from that, Milan Obrenović, according to Slobodan Jovanović, quickly got tired and lost courage in the face of practical difficulties and dangers. After Slivnica, the Serbian ruler gave the impression of a broken and distracted man. And the future of the kings brought new challenges.