Life of Milan Obrenović after the Abdication 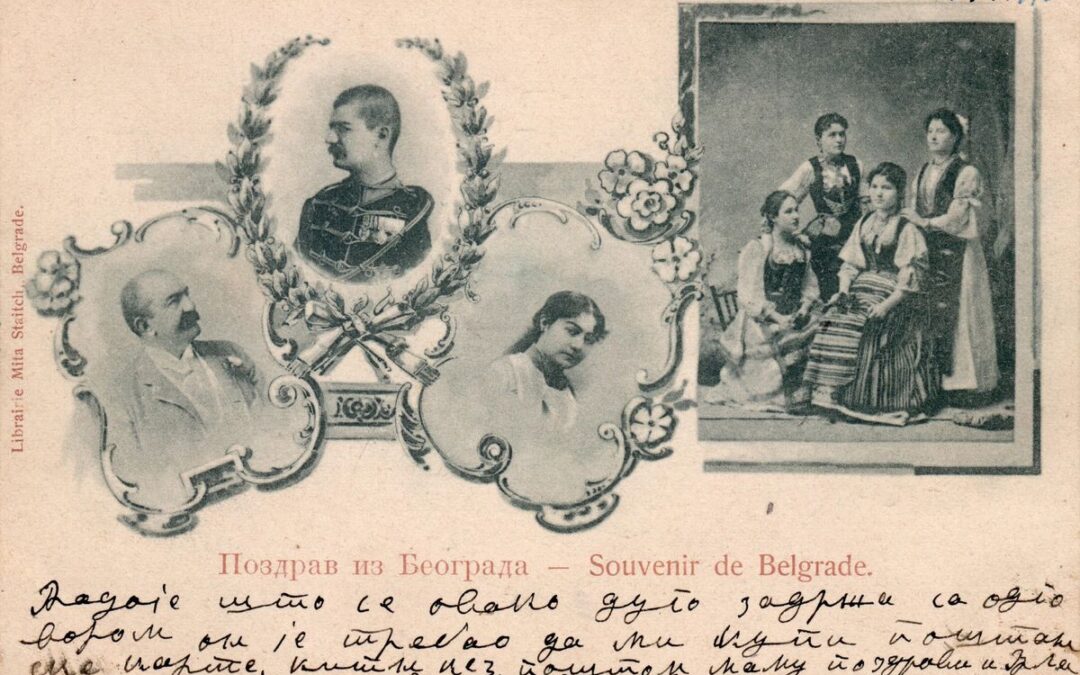 King Milan left the throne in a confused state of mind, tired of his stormy government, discouraged by political failures and private embarrassments. There was also another motivation that directed him towards divorce and abdication, and that was his love for Artemisia, the wife of his secretary Milan Hristić. Until she met the former king, she was a perfectly honest wife and mother. Milan was attracted by the fact that she was a serious and calm woman who listened and understood him. In Artemisia’s presence he found rest for his strained nerves, which he needed.

In March 1889, after his abdication, Milan Obrenović went to Palestine for the Hajj pilgrimage. The real goal of his journey was not to visit the Holy Places, but to attend the childbirth of Artemisia Hristić in Constantinople. She gave birth to a son, George, whom Milan considered his own. The former king was never closer to his concubine, the marriage was prevented only by the fact that Artemisia had not yet divorced. For the next two years, the couple met only occasionally, Milan lived in Paris, and Artemisia in Constantinople. The former king’s financial troubles added to all that. The plan to start big business between Paris and the East came down to gambling on the stock market and gambling at the clubs, followed by losses and new debts.

The Matter of Queen Natalie

The constitution of 1888 entrusted the care of the upbringing of the minor Alexander Obrenović to his father, and this was the main reason for the conflict between the former royal couple. The protocol between Milan Obrenović and the Regency dated March 7th, 1889 stipulated that Queen Natalie could see her son one or more times a year, but not in Serbia but abroad. The former Serbian ruler believed that with Milan’s departure, there is no longer any obstacle to her return to the Kingdom, where she would live, if not as a queen mother, then as an ordinary citizen. The radical government wanted to prevent Natalie’s return, in order to avoid scandals and complications, so, in agreement with Milan Obrenović, she was offered an agreement. The queen refused that proposal and arrived in Belgrade at the end of September 1889. The government did not welcome her, and the palace gate remained locked. She saw her son only two weeks later, and during the following months their meetings were rare. The Queen’s stay in Belgrade was inconvenient for the Regency and the government since political opponents of the current situation in Serbia gathered in her salon. In addition, as a proud mother, she aroused the sympathy of the audience and anger against the government. The Queen’s question was raised in full measure.

The Conflict Between the Young King’s Parents

Pressured by increased debts, enraged by the unfavourable writings of the Serbian press, and determined to fight against the radical government and party, and especially against Queen Natalie, Milan Obrenović returned to Serbia in May 1890. At the end of June of the same year, the queen asked the Council of Bishops to annul the act on the divorce of her marriage. Metropolitan Mihailo, reappointed after a long exile, replied that the aforementioned act could be considered illegal and irregular. A few days later, the metropolitan issued, under pressure from the regent Ristić and the former king of Milan, an act declaring the Council of Bishops incompetent in this matter. Both acts became worthless, and the metropolitan himself showed duplicity and a weakening of the steely resistance for which he was known. Natalie was not ready to stop fighting, so she planned to write a memorandum to the assembly, complaining that the government does not allow her to see her son. In this battle of king and queen, since the decision of the assembly depended on the radical ministers and the radical club, the question of the winner depended on which of the two would come to an agreement with the government first. The radical government was more afraid of Milan than Natalie, so in October 1890 it agreed with the former ruler that the assembly would reject Natalie’s interpellation and that his personality would be protected from press attacks by a new law. Milan left Serbia at the end of October, and the assembly declared itself incompetent to consider Natalie’s appeal in mid-December. It seemed that the queen had experienced a complete debacle.

At the beginning of March 1891, Milan Obrenović returned to Belgrade, in order to supplement the agreement with the radical government. The conditions were determined at the beginning of April of the same year. Milan will receive one million francs in the name of the civil list and a loan will be concluded on the pledge of his real estate in the amount of two million, Queen Natalie would be removed from Serbia. In return, the former ruler promised that he would not return to the country until his son came of age, he had to renounce the right to be a member of the royal house and resign from Serbian citizenship. The king got his money and left Serbia, while the fate of the queen had yet to be decided.

With the resolution of April 12th, 1891, it was considered that the issue of the king’s parents was resolved. The queen was expected to leave Serbia until King Alexander came of age. Natalie’s position was weak, because Milan attracted radicals, regent Ristić and Russia to its side, while members of the small progressive and liberal opposition sided with her. The parliamentary resolution was submitted in writing to the queen, who refused all previous mediations, on May 9th, 1891. Natalie resisted the resolution, not wanting to leave her homeland. The government decided to use force. In the afternoon, on May 18th, 1891, the inspector of the Ministry of Internal Affairs, the town manager and the commander of the gendarmerie came to the door of the queen’s apartment at 87 King Milan’s Street with the aim of escorting her to the Sava port and taking her out of Serbia by ship. After two hours of preparation, the queen left the apartment and was directed to the pier. During the ride, a conflict broke out between the audience and the gendarmerie, the gendarmerie was defeated, and Natalie was returned to her apartment. The government mobilized the army, which dispersed the protestors, and at a night session a decision was made to expel the queen. Before dawn, police and gendarmes raided Natalie’s home, took her to the railway station in a closed mail car and put her on the train to Zemun. With this immoral act, the queen’s question was settled.

As for Milan Obrenović, the Russian Emperor Alexander III gave him the missing two million francs from his coffers, while the fictitious loan was concluded with the Volško-Kamska banka. At the beginning of October 1891, the former king fulfilled his part of the obligations by resigning forever from the royal household. He undertook to settle outside of Serbia, to which he would not return except in case of King Alexander’s illness. In March 1892, he was released from Serbian citizenship. The radical party, since it did not trust the former king, declared that statement a law at the end of March of the same year. It also seemed that the issue of Milan Obrenović was finally resolved and that all his ties with the Kingdom were severed.

Financial Troubles and the End of Artemisia

After waiting for two years, Artemisia Hristić was finally granted a divorce and was able to marry Milan, no doubt due to the confirmation of the claimant rights of her minor son Djordje. But the former ruler no longer wanted to marry, he pushed away his mistress, for which he left his wife and the throne. Artemisia did not want to give up and clung to Milan, as Slobodan Jovanović noticed, with the convulsions of a maniac. The former king had only one wish, to get rid of that pressure. After a few months, with the help of the discreet Paris police, he succeeded in this plan and was free again.

It turned out that all the money that Milan Obrenović received from the Serbian government and the Russian emperor was already spent in 1892. The ex-king, as his credit was exhausted, began to pawn things. At the end of 1892, King Milan owed 345,000 francs and was in such a desperate financial position that he was ready to write a letter for help, in the first days of January 1893, even to Queen Natalie. Faced with a possible divorce, the former queen sent her ex-husband a sum of 100,000 francs. Milan publicized the meeting with the queen in Biarritz, creating the illusion that reconciliation had taken place, and even at his request, in March 1893, the council of bishops declared the act of divorce of the royal couple invalid. Then, in an article published in Paris, the former king claimed that he does not recognize the importance of the radical law from March 1892, which forbids him from returning to the Kingdom. Faced with a desperate financial situation, Milan Obrenović was preparing the ground for a spectacular return to the Serbian political scene.

On April 13th, 1893, the minor King Alexander Obrenović staged a coup d’état, declared himself an adult, took power and established a radical cabinet, thus ending the political crises that arose around the election of the third regent after the death of General Kosta Protić. Public opinion and the press looked favourably on the act of the young king, especially on the fact that, while the coup was carried out, that is, while the ministry of foreign and internal affairs, the city administration and the telegraph were occupied, the assembly building and the houses of the regents were surrounded, they remained calm, had dinner with Alexander Obrenović without suspecting anything. This kind of almost theatrical mastery bore the stamp of King Milan. Namely, the former ruler looked at the savings on his son’s civil list, which reached two million francs, and in order to solve his financial problems, he organized a coup d’état. Milan included the radicals in the sweeping political enterprise, through Lazar Dokić, the tutor of the minor king, and Queen Natalie, Franasović and Garašanin had knowledge.

Father and son met after a long time in the early autumn of 1893 in Opatija, since Milan could not yet set foot on Serbian soil. After that meeting, the young king changed radically in the political sense. The radical government lost his confidence and he tried to replace it with a neutral cabinet. Apart from that, Alexander Obrenović tried to take foreign policy and the management of the army into his own hands. But his plans were quickly denounced, and the young ruler found himself alone and in a tangled position. Angry at the radicals, he could only turn to his father, whom he invited to come in January 1894. Returning to Serbia on January 21st, 1894, the former king again became a significant political factor.