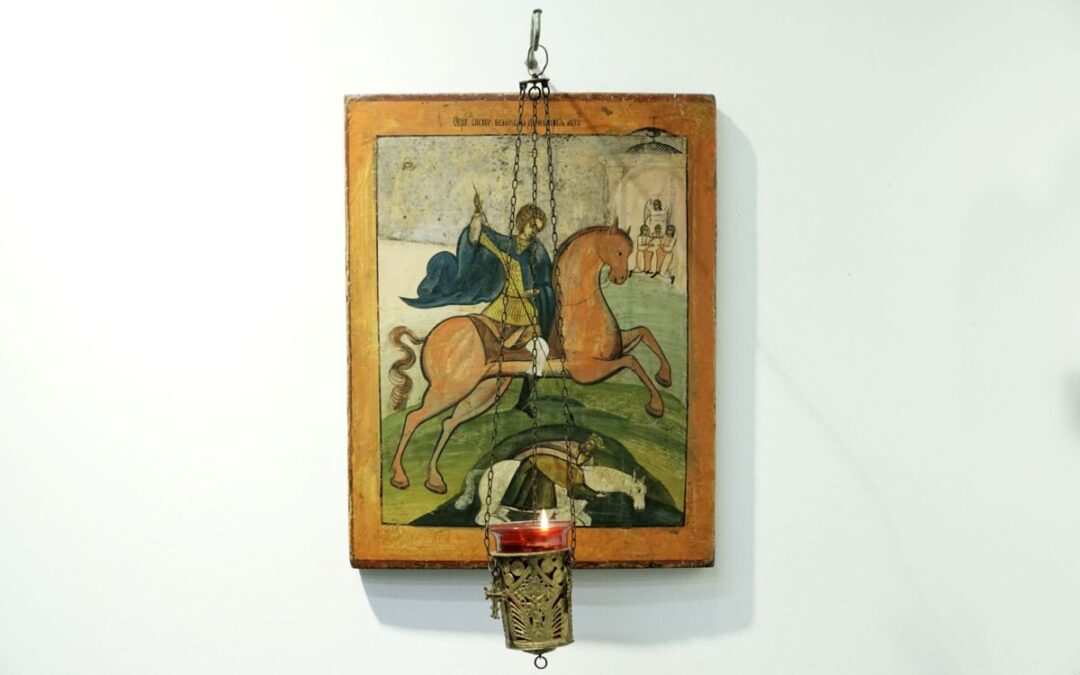 The program “On Slava at Olivera’s House” was held in the Legacy of Olivera Radojković Čolović, on Mitrovdan, November 8th, 2022, the day of family feast of the donor. Through the program, which was implemented by the volunteers of the National Museum Kraljevo, ethnologist curator Sofija Pršić and art historian Jelena Marković, the memory of Olivera and her family is preserved and nurtured through the idea of a living legacy. The program “On Slava at Olivera’s House” was conceived as a reconstruction of the civic Slava in the house of Čolović, which was preceded by the consecration of the bread and grain and gathered her acquaintances and friends.

The host of the event was Dragan Drašković, the long-time director of the National Museum Kraljevo, thanks to whom the Legacy of Olivera Radojković Čolović was created as a kind of museum branch. The bread was consecrated by priest Vladimir Jovanović in the morning, while historian Nemanja Trifunović took the Slava from Dragan Drašković by breaking of the bread.

According to Jelena Marković, when the Museum acquires a house, it acquires not only physical space and furniture, but also the stories, traditions and customs of a family that took place in that house. That’s how the Slava was transferred to the museum, considering that the Čolović house celebrated Saint Demetrius for years. She pointed out that the celebration would be a regular program in the work of the Museum, that is, from now on it will be celebrated every year.

Sofija Pršić said that the strengthening of the national symbol of the feast was also the fact that Slava was entered on the UNESCO intangible cultural heritage list in 2014. According to her, the celebration has a religious and social aspect – religious – cutting the of bread, social – feast. Slava has the function of a national symbol, related exclusively to the Serbian people, which is very important in multi-ethnic environments, in which Serbian culture is recognized. She also pointed out that there is a difference between village and city feasts, in the social context, that is, in the feast itself, where people are not invited to town feasts, and guests come for coffee and cakes, while relatives are invited to village feasts, which according to Vuk’s records celebrates up to five days.

According to Dragan Drašković, there were many people interested in the house itself, including various associations, but Olivera insisted that the house belong to the Museum, which she bequeathed in her will. In one conversation, Olivera pointed out that she would like the legacy to be a monument to her parents and to preserve their memory. Grandfather Tanasija Čolović was a Thessalonian warrior, who died in Bizerte, Tunisia, and father Žarko was also a Thessalonian warrior, who survived all the horrors of the Great War. He pointed out that Serbia was once a country of endowments, and it somehow renewed that act of endowment.

In the afternoon, guests started arriving in Legacy, including the Košanin family. Dr. Olivera Radojković Čolović was the godmother of Marko Košanin, who lived with her in Belgrade as a student. His mother, Vesna Košanin, told an anecdote related to Olivera’s marriage. Given that Olivera married very young, at the age of 17, to Milan Radojković, a mechanical engineer, she promised her father that she would finish university. After her marriage, she moved from Kraljevo to Belgrade, where she finished high school and entered the Faculty of Medicine. When, after many years, she was asked how she was able to go to high school as a married woman, she said that no one even asked her if she was married or not.