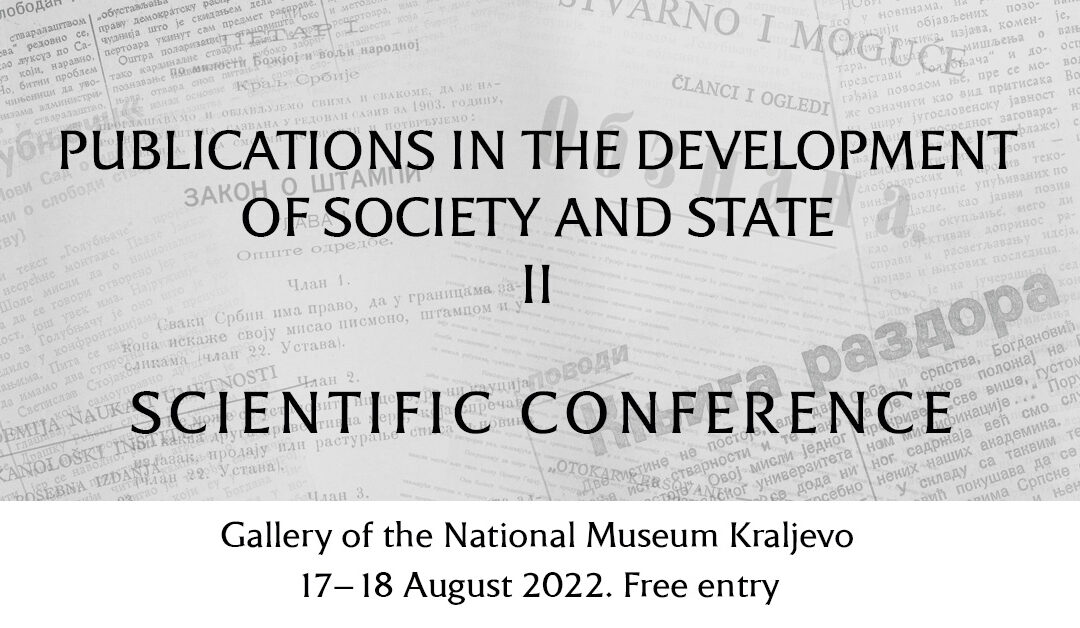 The scientific conference with international participation entitled “Publications in the Development of Society and State II”, which was organized by the National Museum Kraljevo in cooperation with the Institute for Political Studies in Belgrade, Faculty of Law of the University of Belgrade, was opened in the Gallery of the National Museum Kraljevo, on Tuesday, August 17th, 2022, starting at 10 a.m. The idea for this scientific conference and multifaceted research directions arose during the many years of efforts of Slavoljub Maržik, M.Sc., to preserve the history of this city by collecting newspaper articles about Kraljevo in Serbian newspapers. The understanding of the National Museum in Kraljevo to support these efforts to the professional and scientific public, in four books, to present all the collected historical materials made it possible to organize a scientific gathering, for the second year in a row. Predrag Terzić, PhD, Mayor of Kraljevo, addressed the audience first.

Terzić addressed the audience on behalf of the City of Kraljevo, but also as a member of the Scientific and Organizational Committee and a participant of the conference. He pointed out that the idea was conceived through the diligent work of Slavoljub Maržik, but that the scientific meeting will not deal only with Kraljevo topics, but with a much broader framework related to journalism. That is, that there is an intention to continue the meeting as a multi-year project in the coming years. He thanked all the participants who, with their contribution, make the scientific meeting go beyond the local framework. After that, Ljubodrag P. Ristić, PhD, member of the Scientific and Organizational Committee, spoke.

He emphasized that it is a special joy when a person comes to his hometown and meets his colleagues, friends, and scientists at a gathering like this. It is especially important to emphasize that this is the second part of the scientific conference that started the previous year and that it is of an international character. Therefore, he greeted Prof. Cenka Ivanova, PhD, who comes from Veliki Trnovo in Bulgaria, as well as colleagues from Republika Srpska and Serbia. During the autumn, it is expected that the Proceedings of the previous year will be published. Ljubodrag P. Ristić pointed out that he once again wanted to express his respect for Slavko Maržik, who unfortunately passed away in March of this year. At the end of the opening, Darko Gučanin, director of the National Museum Kraljevo, addressed the audience.

He pointed out that it was extremely exciting to observe how a truly noble idea of Slavoljub Maržik eventually grew into a good scientific conference. He used the opportunity to thank everyone who helped make the meeting a reality, primarily the City of Kraljevo led by the mayor, the Faculty of Law of the University of Belgrade, the Institute for Political Studies in Belgrade, and the Institute for Serbian Culture in Leposavić. In the end, he wished all the participants a successful work.