You Were Pain and Sadness, My City! 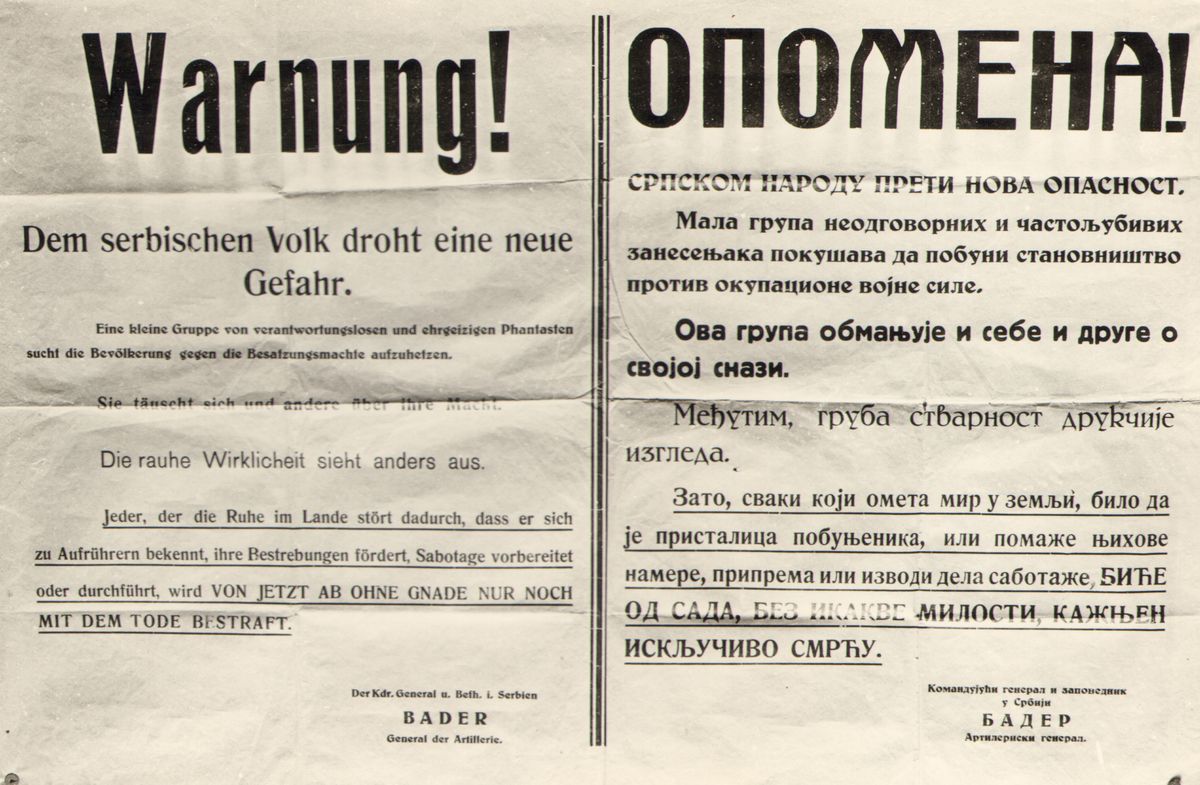 On the eightieth anniversary of the crime in Kraljevo, on behalf of each person shot, we remind you of the October events of 1941.

With the German attack on Poland on September 1st, 1939, the Second World War began, a total war, which spread to almost all continents, and which brought hitherto unimaginable destruction, crimes and casualties. In the following years, Poland, Norway, the Benelux countries, France capitulated in front of the superior German military machinery on the European war scene, and many European countries became either allies or satellites of the most powerful European power.

Surrounded on almost all sides by members or countries close to the Tripartite Pact (the said pact was created by the agreement of Germany, Italy, and Japan in Berlin on September 27th, 1940), the Kingdom of Yugoslavia was forced to sign a treaty at the Vienna court on March 25th, 1941. Belvedere, become a part of it. Two days later, a military coup and large demonstrations, both in Belgrade and in other cities, including Kraljevo, will make it impossible to ratify the treaty and determine the further fate of the state. The response from Germany and its allies will be swift. As early as April 6th, 1941, without declaring war, Belgrade was bombed, and the Yugoslav army, incompletely mobilized, concentrated in the north of the country and attacked from several sides, would capitulate on April 17th, 1941. In Vienna on April 21st, 1941, German and Italian representatives decided on the division of Yugoslav areas, according to which Serbia was significantly territorially reduced and subordinated to the German military administration.

Almost immediately after the end of the April War, active resistance to foreign rule began in Serbia. Actions against the occupiers, raids, ambushes, sabotage, diversions, attacks on soldiers and members of the gendarmerie became more frequent during the spring and summer of 1941. The uprising spread, so at the end of August, Loznica, Krupanj and Banja Koviljača were liberated, and battles were fought around Šabac and Valjevo. The initial successes, later the creation of the liberated territory, were a consequence of the cooperation of two resistance movements, the Chetnik and the Partisan. The joint struggle will lead to the liberation of Gornji Milanovac, at the end of September, and Čačak, at the beginning of October 1941, so that the area west of the Belgrade-Kraljevo line was liberated. However, the differences in ideological bases between the two resistance movements will lead to a split and cessation of cooperation in late October and early November.

German authorities viewed the actions of the insurgents as actions of armed gangs, which were outlawed after the Yugoslav army capitulated. The suppression of the uprising was carried out using repressive measures, mass arrests and shootings. By order of Adolf Hitler of September 16th, 1941, the Wehrmacht commander for the southeast, Field Marshal Wilhelm Liszt, was authorized to overthrow the insurgent resistance by all means and to restore order by the most severe measures. Franz Beme has been appointed Commander-in-Chief in Serbia. On the same day, Field Marshal General Wilhelm Keitel, as the head of the Wehrmacht military command, issued the infamous punitive order number 888 to kill 100 hostages for one killed German soldier, and 50 for the wounded, which established the frightening proportions used in Serbia in the fall of 1941. The crimes committed in Mačva, Kraljevo and Kragujevac in October 1941 were initiated directly by an order of Adolf Hitler sent to General Beme’s Staff on October 10th of the same year, where the authorization was given that “a frightening example should be created for the whole of Serbia, which must hit the entire population.”

In the short break between the two wars, Kraljevo became an important industrial and communication center, namely, the Railway and Airplane Workshop was founded and Kraljevo became a railway hub. For the German military administration, Kraljevo was of great strategic importance, it is an important regional center, where the Command of the town, the 717th Infantry Division, parts of the 737th and 749th Regiments and Artillery Divisions, the Aviation Technical Staff, the Gestapo branch, three armored trains, war booty warehouse and mobile unit were located. With the appearance of resistance to the occupation authorities, the German crew in Kraljevo was strengthened.

Near Kraljevo, the armed resistance to the occupier began at the end of July 1941 and continued during August and September. Both resistance movements took part in the actions, and the partisan detachment “Jovan Kursula” based on Goč stood out, which hindered the occupier by cutting telephone cables, tearing down bridges, confiscating weapons and ammunition from the railway wagons. As early as August 1941, the activities of the insurgents in the vicinity of Kraljevo provoked a reaction from the German command in the form of arresting and hanging relatives of partisans from the detachment, requisitioning the property of rich householders, and creating civilian camps. The situation in Kraljevo and its surroundings became especially dramatic at the beginning of October, when all approaches to Kraljevo were blocked and when a one-month siege began, the goal of which was to liberate the city. The combined forces of both resistance movements were trying to destroy the German garrison in Kraljevo in three major attacks. Armed attacks by partisan-Chetnik units on the 717th Wehrmacht Division, in which 14 German soldiers were killed and 10 wounded, directly served to literally carry out cruel German orders. In response, and in accordance with the orders of the German command, the Germans imprisoned the hostages in a large locomotive hall within the Railway Workshop: from October 4th, workers from the Aircraft Factory, from October 10th from the Railway Workshop, and from October 13th from the railway heating plant, from the station, part of the professors and students from the Gymnasium and the Agricultural School, judges and lawyers, workers of the Post Office, municipal services and from raids on the streets, houses, trains, fields the women, the elderly and minors.

The stage is set for surely the most tragic event in the history of Kraljevo, for the days that will inflict an incurable wound, sadness, and pain.

In the chain of military responsibility of the Wehrmacht, since the headquarters of the 717th Division received the order of the authorized commander-in-chief, General Franz Beme, he forwarded it to the regimental commanders, in charge of carrying out mass retaliation. The commander of the 749th Regiment, Major Otto Desch, issued an order to execute the hostages in Kraljevo, and then in Kragujevac, based on the order of the division command from October 14th to carry out retaliatory measures only on the orders of the regiments. The names of the direct perpetrators are also known – Major Koenig, the commander of the garrison in Kragujevac and the Commander of Kraljevo – Alfons Maciovič.

Martial law was imposed on October 15th, when the shootings began at dawn. In front of the machine guns of the soldiers of the 749th Infantry Regiment of the 717th Wehrmacht Division, the railway men were first brought.

The door to the hall closed and we stayed outside. There were about 100 of us. He showed us a bunch of tools and ordered everyone to take an ax, a pickaxe, or a shovel. Then they lined us up in groups of three and led us under guard to the Ložionica. They stopped us on a large meadow, overgrown with bushes, in the circle of the Railway Workshop… The Germans told us not to dig trenches towards the middle but only around, so now what we were digging was a large square in the middle of which we threw the excavated earth. I noticed several machine gun nests in front of us… All hopes for life suddenly fell into the water… Some jumped out of our machine and began to explain in German that they had small children… some were calmly waiting for machine gun bullets to end their lives. Others began to insult the Germans, to swear, to curse them. Machine gun bursts interrupted all that…

At the sign of the Polish lieutenant Alfons Macijovič, machine gun units fired at the first hostages. At the end of the machine gun fire, German officers sent all those who showed signs of life to death with revolver shots. The shooting continued in the following days. With frightening accuracy, more and more groups of one hundred prisoners were taken out of the hall, until October 20th, when all the slightly mobile patients were brought from the city hospital in front of the German shooting range.

Based on extensive research by historian Silvija Krejaković, it has been determined that at least 2,190 people of various origins, ages and occupations were shot by October 20th. Among them, at least 102 people were under the age of 18, while the largest number of those shot were in the most productive age and working age, between 25 and 45 years of age.

The entire area where this horrible crime was committed is covered with lime. Many families were killed by shooting, many were left without male members, mothers were left without sons, children without fathers. According to the traders, not enough black cloth could be found to make the clothes.