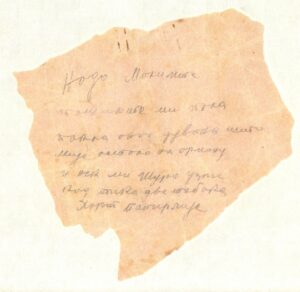 Milivoje Vasiljević wrote a message on his wife Nada, who was in the occupied city, on a torn piece of pink pak-paper with a graphite pencil. It reads: “Nado, please send me half the hell of the tobacco I have left in my closet and let my brother-in-law take two sheets of paper.” Milivoje Vasiljević was a locksmith at the State Aircraft Factory, and the message indicates that, since he was only a civilian and the arrested hostage, like many others, did not believe that there would be a shooting.