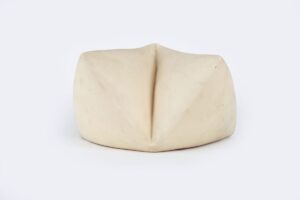 Ana Bešlić is one of the most important representatives of post-war Yugoslav sculpture. Her peculiarity lies in exploring and insisting on the individual world of form, which is realized in the language of pure form. The work called “Pillow” belongs to the series of works of the same name, which was created in 1987/88. Random/furnished pillow forms do not require any explanations, they are self-sufficient excerpts from life, everyday life, intimacy. Ana Bešlić graduated in 1947 from the Sculpture Department of the Academy of Fine Arts in Belgrade. She completed her postgraduate studies in 1949 in the Class of Professor Tomo Rosandić and was an associate in his Master Workshop in the period 1950–1955, together with Jovan Soldatović, Ratimir Stojadinović, Olga Jančić, Ante Gržetić, Sava Sandić and Milica Ribnikar. She is a participant in numerous art colonies and symposiums, and she has exhibited at important exhibitions of Yugoslav art abroad.