Publications in the Development of Society and State II 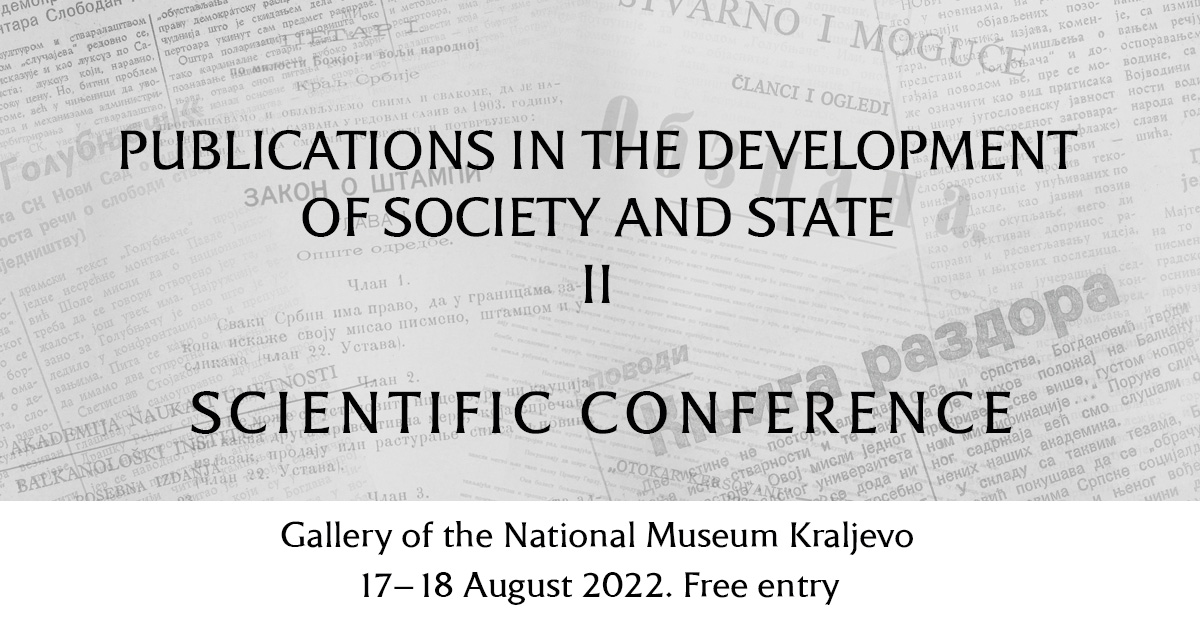 The scientific conference with international participation entitled “Publications in the Development of Society and State II” will be officially opened at the National Museum Kraljevo, on Wednesday, August 17th, 2022, starting at 10 a.m., within the Žica Spiritual Assembly “Transfiguration 2022”. It is the second part of a three-year project organized by the National Museum Kraljevo with the support of the Faculty of Law of the University of Belgrade and the Institute for Political Studies from Belgrade. During the two days of the conference, on August 17th and 18th, thirty scientists from the country and abroad will present their papers.

The idea for this scientific conference and multiple directions of research occurred during many years of Slavoljub Maržik’s efforts to collect newspaper articles on Kraljevo in Serbian newspapers and thus cherish the history of this city. The understanding of the National Museum in Kraljevo and its readiness to support those efforts and present all the collected historical material to the professional and scientific public, in four books, also made the organisation of the scientific conference possible.

The scientific board of the conference “Publication in the Development of Society and State II” defined roughly topics such as: historiography and society; social history in nonfiction (economy, health, education, religious communities, position of women…); press/newspapers and social trends; the social role of significant personalities, families and cities through local and national newspapers; newspaper and periodical research methodology; the development of periodicals as a reflection of the development of society (propaganda and/or encouragement); political vocabulary in newspapers and periodicals; linguistic analysis of news reports; literature and politics; domestic writers and occupying newspapers; culture in politics / politics in culture / political culture; public speech and public condemnation / freedom of expression, social criticism and political views.